Life companies are safe, hence the state shafts them

The new budget has placed a 1% levy on all life assurance policies commenced from June 09′. The levy will apply to

Why levy life policies? Why not oranges or food? Or shoes or electricity? There are two reasons. 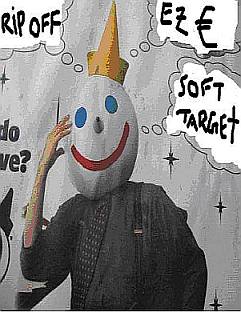 Firstly, Life Companies are incredibly safe, they tend to have core tier 2 capital greater than most of the banks relative to their market cap. Irish Life for instance has c. €2bn. And people are going to keep and hold insurance irrespective of how the economy goes, in fact, during recessions the need and urge to hold insurance increases as people are less likely to feel that they can mitigate loss via future cashflows.

Secondly, is the need for insurance is virtually inelastic, so the tax take on it won’t collapse, nor will people opt out of buying it, after oil and food one of the most inelastic demand side products is insurance. So manipulation in prices won’t undo either supply or cause much of a change in quantity.

In a nutshell: Life Assurance companies are soft targets, the state is going to shaft them, not because they did anything in particular, but because they ‘can’.

I know you might say ‘Well ILAC was part of that Anglo scandal weren’t they?’…. O.K. point taken, but that’s only one firm out of many and the whole industry will have to bear the brunt of it! What about Canada Life? Hibernian? Zurich (formerly EagleStar)? Caledonian? etc….

While this is a demonstration of zero-creativity by the state, it is nonetheless something we have to live with and I would say this: If you need to take out insurance do so soon and on a ‘single premium’ basis, and at least avoid the first years levy.