The calls for ‘more split mortgages’ are commonplace, what is often lacking is a deeper understanding of the flaws inherent. For instance, why was there any outcry at banks charging interest on the warehoused portion? Failure to do so is an effective write-down and cash flow loss.

That isn’t to say banks shouldn’t get both, but don’t dress it up in the flowery language of ‘split mortgages’, instead just say ‘we believe in write downs and cash flow losses’. Take an example where a bank doesn’t charge interest for 25 years on a €100,000 warehoused portion of a mortgage where a total of €300,000 is owed. 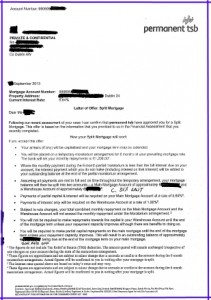 Assume a discount rate (we’ll side with ECB being able to do their job [mistake]) of 2%. The present value is = 1/(1+r)^n this is where ‘r’ is the rate and ‘n’ is the compounding periods. The reason for doing this is to give an idea of what the €100,000 would be worth in the future if there was no interest and inflation never went over 2%, the answer is about €61,000 which is a significant write down.

Another issue we have with ‘split mortgages’ that they actually work! They are untested. The hope is that (from the banks perspective and likely the borrowers as well) conditions improve and more of the warehoused portion comes into the repayment pot, but is this any different than opting for interest only?

Remember, on a split mortgage you HAVE to have it on capital and interest. Meaning that anybody with a tracker might not be better off even with a significant split.

Take an example where the person owes €300,000 on an ECB+1% tracker. If they were given interest only for 8 years the cost per annum would be €4,500 or €375 per month. A few years down the line they could revert to capital and interest. If on the other hand they did a split mortgage, apart from having a bullet payment of €100,000 which might mean having to sell the property, they now do full repayment on €200,000 which will cost €800.

People who can’t pay often have a liquidity and solvency issue, a split mortgage doesn’t solve solvency as the full debt is still due and may not fix liquidity as you can see it will be more expensive even when split versus being on interest only!

Then you have the shenanigans, such as the PTsb offer (click on the picture above the previous 3 paragraphs to read the full document) of a split mortgage. In this instance about €100,000 is hived off, attracting a 1% interest rate, the remaining €200(ish) is on a fixed repayment which doesn’t serve the full capital, meaning the balance will only come down by €20k(ish) while the amount owing will be €125k(ish), add them together and they cancel out.

How is that different from interest only? Same net effect, the reason it’s different is because it ‘counts as a solution’, don’t forget that the Central Bank in setting the guidelines determined a few things, long term interest only isn’t a ‘solution’, something with their ‘user friendly label’ that does the same thing in effect, is a solution. Equally, threats of repossession are ‘a solution’, hence banks were reliant on these as part of the ‘answer’.

Once again, in dealing with this dog of an industry we see that little is changing, the victories of politics and regulation are every bit as failed as the banks they claim to rule and oversee.