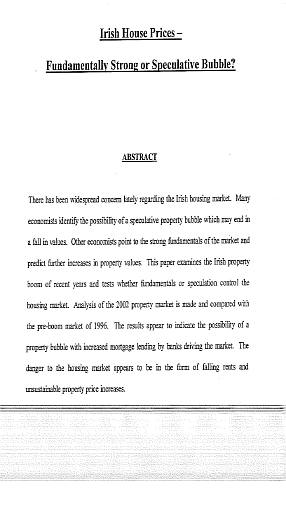 We are delighted at the prospect of having another contributor to our blog, this post will be the first using a thesis put forward by our guest Frank Quinn. We have worked with Frank on numerous reports from our Rent or Buy report to the Investment Property Reports.

This is a paper he wrote from 2003 examining whether the Irish housing market at the time was fundamentally sound or whether there was evidence of a speculative bubble at that time. This is one of the few papers I have read that literally spelled it out and quantified the belief showing the disconnect between historic prices and yields, there were many commentators expressing similar opinions [and I would ask that anybody who has similar resources from around that time to post links] but this paper brought many facets of the argument together in a way that was not being widely looked at during the time.

There were three major elements to the report.

However there was a gap of about 16% between actual house price since 2002 and where they should have been
based on the fundamentals. This may have been a sign of a speculative bubble.

Part 2 Was a co-integration analysis of House prices and Rents. The aim was to determine whether there was any divergence of the market value from its annual income during the property boom. There appeared to be divergence of house prices away from rental incomes and this may have been an indicator that the fundamentals no longer controlled the property  market.

Part 3 Examined the changed in the lending criteria of the banks which had occurred during the start of the property boom. It demonstrated the dangers of increasing the amounts people could borrow. It concluded that the huge increase in mortgage lending had created potential dangers for purchasers and also for the banking sector.

Below is a graph from the report (I had to hand write in the red/blue lines because it didn’t photocopy across very well) showing the growing disconnect in prices that started in the mid 90’s. The full paper is available here

You can contact Frank Quinn at Senior College Dun Laoire where he is a lecturer in Valuations, or by email at
fquinn(at)scd(dot)ie 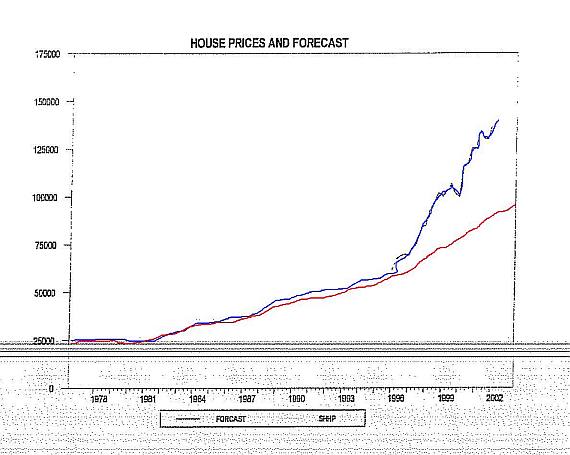