IBF Latest Lending figures – what does a ratio tell us?

Yesterday good news was spreading about a year on year increase in new mortgages for home-owners, I debated the topic on TodayFM with Pat Farrell from the IBF. Figures are tricky to do on radio so I figured I might write something today, but got a surprise before the chance came when I saw the Irish Times article on the topic.

It isn’t like the Irish Times to get it wrong (personally, I take whatever the write as a virtual equivalent to gospel), but they did, today’s article states that we saw the first rise in mortgage loan numbers (we didn’t), and

“The number of new mortgage loans issued during the second quarter rose on a year-on-year basis, the first time this has happened since early 2006.” (this would imply that lending grew or was larger YoY, it wasn’t).

The IBF/PwC Mortgage Market Profile reveals that a total of 3,225 new mortgages to the value of €524 million were issued during the quarter, up 22 per cent on the preceding three months.” (again, a growth story, but Q2 has been bigger than Q1 ever since the lending data has been collected – which is a false positive).

This demonstrates a problem that occurs from time to time where people confuse statistics, facts and inference. So below look at the actual figures… 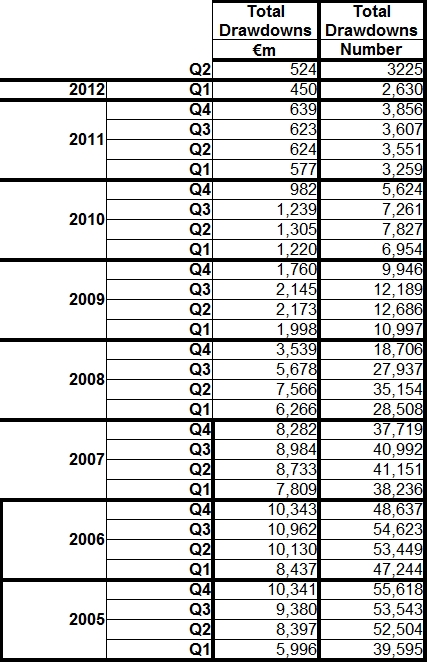 What is clear from the start is that when it comes to gross lending amounts, or even the number of loans, that there is no increase, in fact, credit is still contracting. So why the positive headlines? It is because of the ‘inferential’ reference that was made, that the percentage of first time buyers and home buyers within the mix is higher.

I’m a fecker for analogies and would like to use the terrible brand that comes easily to me to explain this. Imagine that all first time buyers and home buyers are blueberries, and investors and people who top up are strawberries, and we use them both to make a pie.

This years pie is smaller than last years pie, and last years pie was smaller than the year before, the pie has been getting smaller since 2006. Right now there is not enough pie to feed all of the people that want it (credit contraction) but within that pie the ratio of blueberries to strawberries is higher. That inferential statistic is that we now have a higher percentage of first time buyers and home purchasers, that might sound interesting but it denies the general picture of reduced credit. It also only tells one side of the story and is a great example of how inferential analysis can give a contradictory headline to what is actually happening.

Would that ratio naturally change if the strawberry crop failed? We have seen a total aversion to investor lending and top up loans, so any lending is naturally going to skew or favour those who are buying homes, there are also other contributing issues.

People are not topping up, banks are increasing margin making top ups less attractive because many of the people who might top up are tracker holders who have heard lots of scary headlines about standard variables which are the only variable available (the fixed rate suite is worse).

Switcher business is down as well, not because people won’t switch, but because many banks have closed their doors to them, for instance, AIB who have the best rates in the market don’t take switchers, they have dropped LTV’s for investors, as have many other lenders, this naturally leads to reduced investor lending and no switching.

Currently we have the duopoly banks with KBC in a distant 3rd place, so when one of them makes a behavioural change (or several do together) it is no wonder that the make up of the berry-pie will also change. Again, this gets away from the true story which should not be about the ratio within the mix, but about the general status of lending which is going one way only, down.

Having spent €64 billion on banks to ensure they could lend we are getting back less than 4% a year in credit, frankly, you couldn’t have engineered a worse outcome unless you actually borrowed the money and set it on fire.