Get ahead of the curve on fixed rates… Oops! Too late!

We have been touting fixed rates for quite some time on the basis that people needed to fix at the time rates were heading for historic lows, not after the fact, as well as that, the indications from the ECB that they would not go below 1% and instead would seek alternative options (such as QE) meant that once we got close to the 1% the forward market would price that in, but when we actually reached the 1% base that equally the forward market would price in rising rates.

That is exactly what has happened, it wasn’t front page news when we said it, although the Sunday Times did do a big story in their business section in mid-February, but now that banks are starting to raise their interest rates it certainly is!

It gets back to planning, without exception every client we had that deliberately went for a fixed rate in the interim is in a good position, some who have opted for variable rates are doing well for now but with the avoidance of further rate drops clearly stated by the ECB and the margin increases we saw through 2008 on variable rates then it quickly tells you that there is virtually no inherent value in a variable rate without guarantees on the margin, this was precisely the thing that made tracker mortgages attractive.

Having said that, you can still buy into a fixed rate at a really great price, the one and two year money might sell ads or get your attention but it is really the 5 & 10 year money that is where you can beat the curve.

We talk about ‘getting ahead of the curve’ a lot on this blog, what we mean (because I get a lot of emails saying ‘I didn’t understand that bit’) is the yield curve, of trying to see where that is headed to help you make a decision. Considering rates in the long term is like driving down a road at night, you can only actually see the things that are say, up to 100m ahead, that’s the short term market, but if you were on a road that other people were travelling on, going up a hill, you might see there lights way off in the distance and realise there is a hill up there, the road you are actually on might not be that road but it indicates a hill is there. That visibility is the forward market.

So we can see short term rates easily, Euribor tells you that, mortgage rates etc. also do some interpretation, but when you move out a bit, then it’s market interpretation and that is the right hand side of the yield curve. 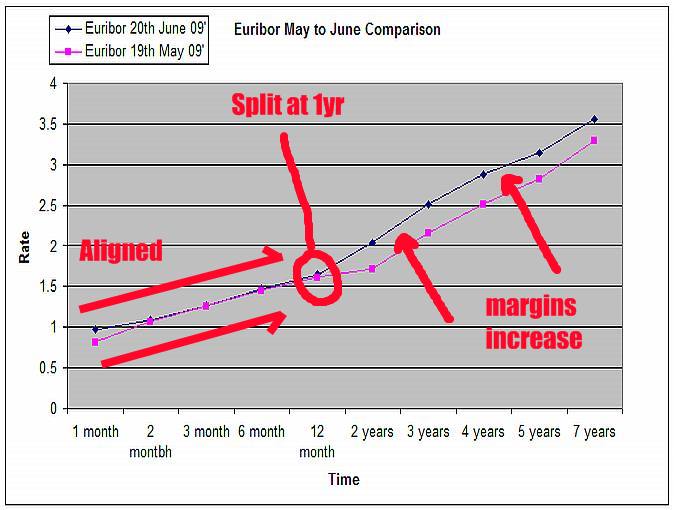 Take a look at this graph, we see the month to month Euribor is virtually matched, and apart from pre-emptive drops in the short term upon rate decrease expectations, the Euribor in short periods has been virtually like this for all of 2009. The short term interpretation has held very few shocks. However, when you look to the right you see mismatch, the margin splits at the 12mth mark and widens right out at 2yrs, it then keeps this disparity for the foreseeable future.

What does that mean? For fixed rate mortgages it means that any fixed rate above 1yr is likely to get more expensive, but mortgages aside (imagine irish mortgage brokers saying that!), it is really telling us that there is inflation uncertainty once we pass the 12 months into the future mark.

So in order to ‘get ahead of the curve’ you need to make a decision now before that possibility of inflation and the increased rates that will accompany it, come along. We are one of the only retail brokerage houses that regularly publish the yield curve and try to consider the implications of it, you can check other articles in our archive.

If you are toying with the idea of a fixed rate and you are on a standard variable rate then take note: your rate has nothing in it which guarantees value in any way, for all the talk of banks ‘passing on the full rate cut’, most of us have short memories, remember this – banks were jacking up variable rate margins throughout the first half of 2008 when the base rate wasn’t even moving. Take an example of First Active, their rates vs the base rate are below, the bottom line shows their margin 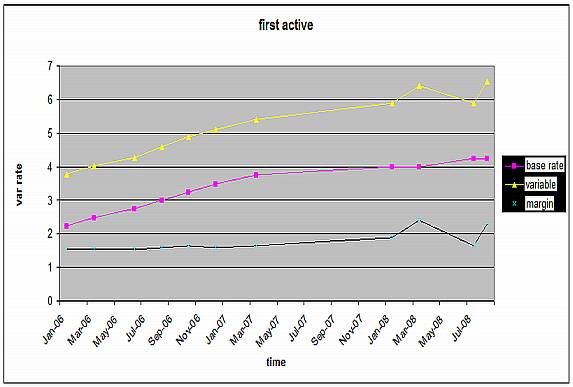 Note that the variable rate (yellow line) was rising from mid 2007 to early mid 08′ when the base rate hadn’t actually moved! and the margin line (black one at the bottom) was steadily going from about 1.3% to close to 2% at the end of 07′ and then up over 2% in 08′ [the temporary drop at the end was when there was a slight delay in publishing new rates in July 08′ which was the final base rate hike].

Don’t be surprised if you see rates start to rise again, at such a low base rate the increased margin wouldn’t be detrimental to most, and its a perfect opportunity along with several other key measures we will probably see such as the removal of interest on current accounts (or at least ways to really reduce it), decreased margins on deposits, and increased credit costs in other areas (cards/personal loans etc.).

So don’t say we didn’t tell ya what was coming down the line! In a nutshell, higher rates, less benefit from retail banking products and greater cost to the consumer, as always, it pays to plan.