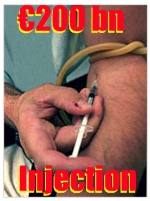 The ECB have just announced a €200 billion plan designed to stimulate eurozone economies, it is unlikely though that Ireland will take part in any of the plan. It was unveiled earlier today by Jose Manuel Barroso, €170 billion will come from member states and the remainder will come from the European Budget and the European Investment Bank.

Ireland has no room for further fiscal stimulus at present according to the Department of Finance, the foremost issue with Ireland is (according to Europe and our own government) is to get our spiralling deficit under control. One aspect of the stimulus is that €5 Billion will be going towards building greener cars (maybe this is the big break the AirCar has needed!).

The EU are taking these measures to avoid further downturn and to do so with coordinated policy responses. In the USA they announced an $800 billion Dollar stimulus plan. Both LIBOR and Euribor rates fell which will help take some of the heavy compression out of the interbank market, however, at some point the stimulus packages will have to stop and we will need to find a way out of this in a natural fashion.

The M3 Money supply/stock is increasing as more and more funds are flushed through the system to alleviate the issues arising from the financial crisis, at some point this money will reach over supply and we will see a period of inflation. We are not saying this will occur in 2009, however, towards the end of the year we may see inflation creeping into the market, the concern is for 2010 and after that where the increased money supply mixed with low rates causes money to no longer be hoarded and to flow more freely through the market.

On the point of interest rates there will be an announcement at the next meeting of the ECB in the first week of December in which another rate cut is expected.