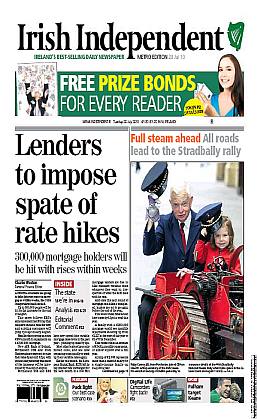 EBS have announced a rate hike of 0.6% which is a follow on from their last 0.6% hike that was levied against variable rate mortgage holders on the 1st of May, this brings their margin increases to a total of 1.2% for the year to date.

Today’s Indo lead with this story (by Charlie Weston) and rightly pointed out that by the time this is over, a person with a €300,000 mortgage over 30 years could expect to pay just over €3,000 a year (after tax) in increased mortgage payments. For a person on the average industrial wage this is like a full months wages before tax being sucked away by the financial system. Tax hikes and wage cuts aside, this will ultimately reduce the money that is being spent in the economy and it will disappear into the financial system where banks will use it to de-lever further.

The contention for many people is that they are being punished, not for what they have done wrong, but for what they have done right, the people who will see their loan payments increase are those who have performing variable rate mortgages. The increases are threefold, firstly is to cover the cost of funding that EBS and other banks are facing, a large part of this is down to the institutional decisions that they made. Secondly you have the people in arrears who’s impairment costs are affecting the cost of funding to the institution as well as decreasing the operational income the bank can obtain. Lastly is to subsidize the tracker mortgage holders whom the banks mistakenly lent to at rates that are (as it turns out) not commercially viable. 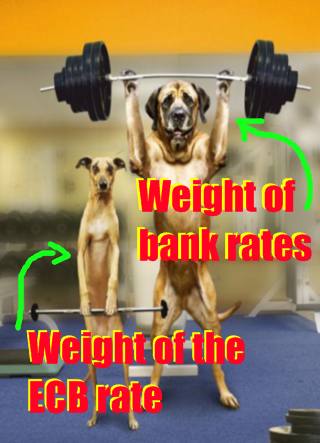 What can people do? Very little, personally, if I was an EBS member I would withdraw all of my savings from them immediately, banks have two sides to the balance sheet, one is lending (assets) the other is deposits/funding (liabilities), and while reducing liability might be a good thing for most companies, in banking it doesn’t work that way, they need those deposits in order to fund loans. Removing deposits from a bank when they make a decision that adversely affects you is really the only thing a small person can do in response to the institution.

Economically we have a concern that rate hikes will ultimately prove to be a deflationary force on the Irish economy, and there is little that can be done to stop this, the Financial Regulator has made it clear from the past that they will not intervene on prices, the Department of Finance is taking the same approach. However, these rate hikes are taking away the same income that the state needs to survive on and will push many people into financial difficulty and out of the effective tax net. For the average worker €3,000 a year is almost 10% of their income, if there was a 10% of income addition to income taxes there would be a revolt, but not so when banks hit their customers, people are acting irrationally and we don’t understand why.

The banks set to follow (according to the article) are AIB, BOI, PTsb and INBS. We had predicted a 100 basis point increase in 2010 starting in Q1 by 50bps followed by a further 50bps later in the year with a final 50bps in 2011, this has proved to be quite a prescient prediction (and one we wish we could have been wrong about!), but it isn’t one that people have to be powerless about, do your talking by changing your mortgage to a different institution or moving your deposit, change your credit card provider (if it is via your bank) and switch your life and home insurance (where appropriate). Consumers are only able to be victimized to the extent that we allow banks to get away with it.