Dublin, Ireland the next tech city?

Cities are formed by their socioeconomic environments, and therefore, external developments of all sizes heavily impact them. The urban effects of deindustrialization and global economic restructuring are well documented.  From the Industrial Revolution to the 21st Century, urban transitions mirror societal changes. This is seen in North American and European cities, and in less-developed nations where massive industrialization is currently taking place. Dublin is symbolic of urban economic reform since it has seen substantial changes in recent years making it the next tech city.

Ireland was one of Europe’s wealthiest nations from the mid-1990s until 2007, when the global financial crisis struck, with the country’s GDP almost twice the European standards. The economic expansion was fueled by the convergence of several intrinsic and extrinsic factors. Also, a sequence of pro-growth government legislative proposals, such as the provision of efficient monetary rewards to attract more foreign investment, particularly from North American sophisticated production company and service companies, and, for the first time in Irish history, massive net immigration was witnessed. The most remarkable effects have been felt in the Greater Dublin Area, where new economic operations preferred to concentrate in the central City or the surrounding suburbs. Still, increasing housing costs caused employees to live farther away downtown.

Significant physical construction projects have been built to handle the population transition and legislative policies to counterbalance unsustainable expansive growth patterns. While most of the new buildings in Dublin over the past 15 years have taken place in the once mostly rural counties on the City’s outskirts, the city center has seen a series of substantial changes that may be divided into distinct, though not necessarily distinct, periods.

Although the city was founded by the Vikings, greatly influenced by the Anglo-Normans, expanded throughout the medieval age, and carefully laid out in a classical manner throughout the eighteenth century, the first vast and rapid urbanization occurred in the 1930s forward. In addition, the mid-twentieth-century transformation in the Irish economy from a predominantly agricultural towards a more manufacturing-based resulted in increasing employment and technological improvements in Dublin.

Dublin is seen as the next tech city because the Major Tech companies like LinkedIn, Facebook and Google are setting up their headquarters in the City and because the  is becoming an educational center with its fair share of Major Universities. Furthermore, Dublin is one of Europe’s youngest cities, so plenty of motivated professionals and graduates seek to invest in the City. Following in the footsteps of youthful talent, Dublin now offers innovative, creative pubs, a diverse variety of gastronomic alternatives, and an exciting nightlife to match a few of Europe’s largest cities. As Dublin is now a center holding many start-up businesses, it can only grow, and we shall all be watching and of course investing in property! 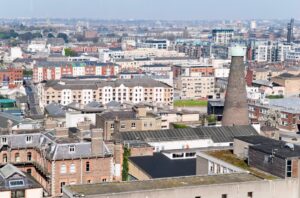