One of my favourite tools is that of the Yield Curve, in the US they look at the Treasury Curve and the TED (Treasury/EuroDollar), in Ireland we use the Euribor, and what the curve tells us is the interbank cost of borrowing money, or I should say that is what it represents because it can actually tell so much more. It is a market mechanism that gives an indication of what the belief is in the market towards inflation, interest rates and cost of funding, this isn’t opinion, it is derived from real money flowing around the world and that is why I like it, the Yield Curve doesn’t lie.

So we’ll take a look at what has been happening in the last month. 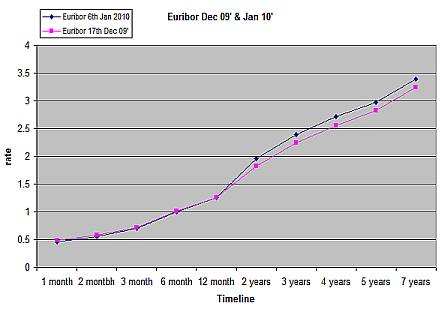 We see something interesting here, the short term expectation is that rates will remain low, in fact, with deflation still a fear the short-term working money (banks generally run off the 3 month) is getting cheaper of late. The divergence occurs after the 12 month mark, so essentially in a year the change in expectation in the last month is that rates will start to go up by more than what was expected in December, that is where the blue (jan 2010) line breaks away from the purple (dec 09′) one.

What does that indicate? For a start it means that for the next 12 months nobody is overly concerned about a rate hike, we keep hearing it in the press but in the market there is nothing within the next 12 months that spells that out, if there was (and it’s not to say that things can’t or don’t change – quite rapidly at times) you’d see a much steeper curve arising. The other thing we can take from it is that between the 12 month and 2 year mark a rate hike is expected, part of the increase in price at that point is uncertainty, the longer you look out the more uncertain it gets, but the basics of it are that rates will rise at some point after a year from now.

Month to month trends are not the most telling, we can get a clearer picture if we compare several months – not for a secular image but for a cyclical expectation, so here is a chart showing mid Q3 to Q4 and the start of Q1. 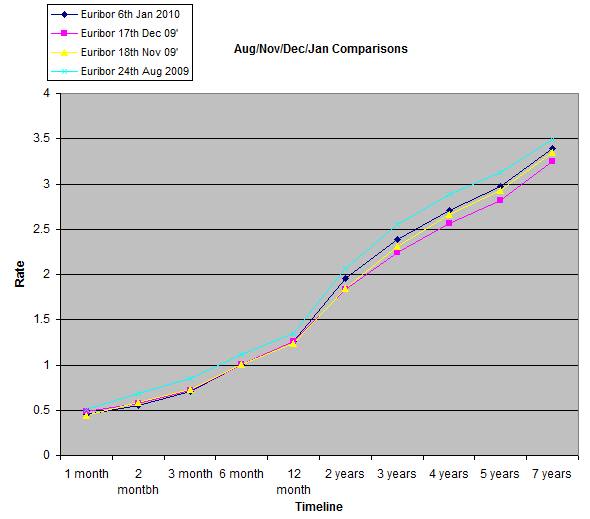 What we can see is that in general, the fear of inflation or costing of it into the market, has dropped since August 2009. There has been some consolidation ever since then,you will see that again, they all have a similar expectation up to the 12 month outlook then the expectation changes. November to December saw expectations drop on prices further out, but since then (with fear of ECB reductions in liquidity provision) it rose higher in January 2010.

Oddly, this curve and the steepening of it is good news for banks, they can borrow very cheap on the short term and get a higher rate of return in Bonds (note: lending is likely to reduce because the risk free rate is better), or they can use that steep end to price out higher fixed rates and then go to the swap market.

One way or another, the big question seems to be pegged (recently) to the one year mark, I think that we may be surprised in 2010 by the ECB not increasing rates or doing so only enough to placate the Germans and French (c. 25 basis points).

On the deposit side it means that you can expect banks to drop the rates they are willing to pay depositors, other than banks which are cash hungry, and what many of them will do is offer out a rate then go to the risk free market (sov. bonds) and place it there, in any case, the short term outlook isn’t one where you can expect a credit multiplier, having said that, if and when that comes it may turn out to be pretty impressive.

I hope you can see now why we watch the yield curve so closely! It is a fairly decent compass when you take the time to look at it and compare it over time, I just hope you haven’t already fallen asleep at this stage!