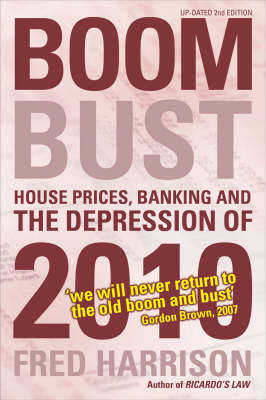 I have been quite public about my belief in property tax (caveat being we should have far less income tax/levies etc. perhaps a ‘flat tax’ would be best), and if there is one book that has really helped to shape that opinion quite succinctly it is Fred Harrison’s masterpiece on the topic, and the subject of this review ‘Boom Bust‘.

Fred Harrison saw the property crash in the UK of 1989/90 in 1980, and furthermore, he named a date, he also named a date of specifically 2010 (as a bottom, not as the ‘start’ of a crash) in the mid 90’s. How? It is due to his analysis which goes back to the 1500’s of property cycles, and while I am still sceptical about his ’18 year’ cycle, the one thing that fully convinced me was the basis and need for a more rational and working approach to property and taxation of same, or the ‘democratisation of the tax base’ as he often refers to it.

This book was published in 2005, based on research carried out long before that and naming the time-lines that a crash would occur in, how this book is not more widely known is beyond me, it is almost like a looking glass into what was coming down the line.

The book covers a wide diversity of opinions and areas, one that is slightly overdone is the personal vendetta Harrison seems to have with Gordon Brown, I tried to reach Harrison several times, I like to call the authors of books that I read and talk to them, however, so far I have not even been able to get an email back! Even Peter Schiff responded to me! It’s a pity because I would really relish an opportunity to talk to this guy for a half hour. His knowledge , the breadth and scope of which seems almost unbound, would offer any discerning interviewer an opportunity to look into what is perhaps the ‘right road’ to travel in terms of avoiding painful busts in the future.

One of the messages I took from this book was that perhaps income related tax was only brought about due to the societal mix of the people in power when it was passed to law and that meant that from the very start the system has been flawed. He points out that taxation on property should have been the basis of the system but the House of Lords who prevailed over passing law in the late 1700’s were the very landowners themselves so such an approach would never come to pass. In essence, rent seekers have been protected from the very start.

While there are elements of this book that one may disagree with (it covers so much that it would be hard not to find fault in at least one or two areas), it is, on the whole, a ‘must read’. In particular if you have an ‘against’ opinion when it comes to property taxation. While it doesn’t go on to say we need flat tax on incomes or such, the idea of taxing assets rather than focusing on incomes is well put forward and makes for challenging reading, don’t read this book if you are looking for something to switch off to, it is inherently thought provoking.

The idea of property being central to every historic bust with few exceptions is a compelling one, and it is teased out in no short order with facts and statistics drawn from around the world. The link to speculation in land as well as leverage is clearly drawn out and in that respect it is one of the core correlation to the roaring twenties and the late nineties to now, liquidity and leverage, albeit the two times had very different causes.

Fred Harrisons ‘Boom Bust’ would be on my list of ‘must read’ books, even though you may or not may agree with elements of it such as the 18yr cycle theory that he puts forward. The problems of property are many but the solutions are thankfully pragmatic. Will we actually see any of his solutions used any time soon? Unfortunately, I would wager ‘no’, but that doesn’t mean that the process of rationalising taxation and understanding the shift that needs to take place in revenue raising is not underway on some level.

The question that still remains, is one first asked by perhaps the greatest economist of them all ‘to whom belongs the wealth of nations?’, until we realise that land is a national rather than purely private asset then we are likely to continue the current application of taxation and thus, follow the boom bust path that has lead us here to begin with.

Here is a video of Fred Harrison, talking to the renegade economist.