Banks have a message for you, ‘Get off my loan book!’

We have been saying for quite some time that banks would start to find ways to induce people away from their loan book. The first mention is from a post here back inn 2008 where we mentioned ‘early redemption bonuses‘  and then we also said something similar which Niall Brady from the Sunday Times picked up on in July of 2009.

The basic premise is that banks want rid of certain types of borrowers and loans in particular, and in some cases loans in general. We’ll take a look at the loans that bother them the most below.

1: Sub-Prime loans: this is definitely the clearing house recently Fresh Mortgages sold their loan book in a private deal believed to be well below 30c on the euro. This was for a book that was secured on sub-prime mortgages and serviced via a centre in Northern Ireland, something Fresh did was to offer their borrowers an inducement to go elsewhere or pay off their loan. You can take it that for all the hard talk about sub-prime lenders, that they will be the most generous when it comes to inducements.

2: Tracker mortgages: Bank of Scotland recently offered incentives to borrowers to get off their loan book and at €1,150 it ain’t chump change either (see picture below)

This is the first time a definite incentive has been offered to get people (in prime lending) to go somewhere else, and it is most certainly directed at tracker holders (which represent the bulk of their loan book). Bank of Scotland have a legacy issue to deal with in leaving, for a start, they have to continue to service these low margin products which comes at a cost, and secondly, they are not producing the kind of profit they had hoped for, so an ideal end game for them is for people to switch and go elsewhere. 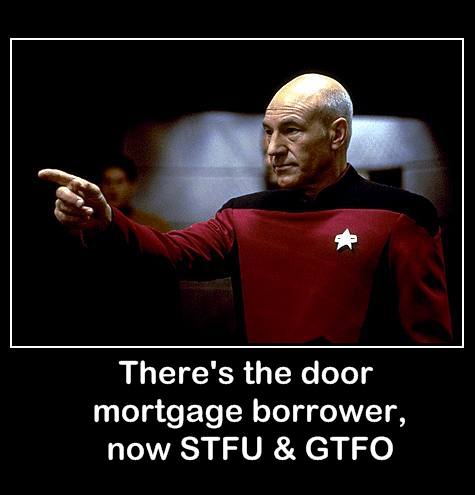 The current incentive will likely be followed by greater incentives in the future, I’m not saying this will be a bonanza, but it could well be a five figure sum eventually.

3: Other loans: There are other loans which banks would like to be rid of, people who have full contract interest only options (rather than for a set period with reviews stitched in) are going to become persona non grata. These loans do very little to facilitate additional lending if the securitization market is not functioning correctly. And in an era of collapsed property values it also makes things worse for a banks asset position because repayments are not reducing the level of loan versus the value of the property. These loans will be the last ones that a bank can sell on, and that means the best solution (from a banking perspective) is if the borrower goes elsewhere, what’s worse is that in many cases the people on these contracts also have low margin trackers!

Serious non-performing loans would also fall into this category, in an ideal world the borrower would pay off their loan in full or go elsewhere but as that is not possible in an impaired loan it means banks will be stuck with loans that are not performing which, at the same time they can’t move on (due to the new code of conduct on mortgage arrears) and also which they are afraid to move on for fear of realizing market values when they do.

All said, there are many borrowers that the banks want off their book, the question is how will they do it and how can you make sure to benefit from it when the time comes? De-leveraging can only be partly achieved by the institution through repayments, so they’ll need to find a way to encourage quicker repayment/prepayment, the stick will be rates, the carrot will be incentives, watch this space!