Bank of Ireland released its mid-year results to the 30th of September which revealed a pre-tax profit of €650 million, this figure is down 32%  on the same period last year. They have also announced there will be no final dividend this year.

Shares in Bank of Ireland in excess 90% down on their 2007 highs of over 18 Euro, shareholders have had to shoulder this catastrophic loss and are now being rewarded with no hope of a dividend in the near future. Their core tier 1 capital is at 6.3% which is up from their position one year ago when it was 4.9%. 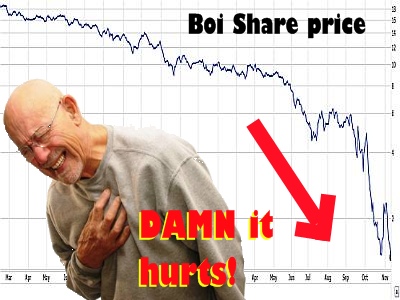 Brian Goggin was interviewd on Morning Ireland and was ripped a new one by them, Claire Byrne and Ger Gilroy of Newstalk 106 got a hold of him next and put him through the ringer as well. Today is a day that it is worth not being paid a few million a year if you can avoid that kind of press.

As a shareholder of Bank of Ireland I can only imagine what long term investors who bought in the past are feeling, I bought in from the €4 mark down and my losses are significant, my heart goes out to those who thought they might retire on what they believed was solid and reliable stock. Dividend is one of the only things BOI have to attract investors and now that is off the cards. 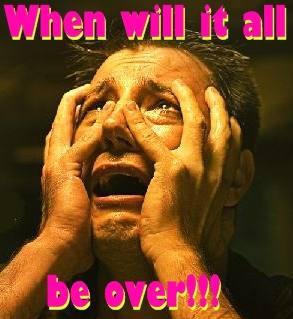 markets take to their bond issuance, if it is met it means the Government Guarantee (bailout) is working, if not then it means that as a nation we are getting closer to a ranking with Argentina or Iceland than that of the USA or UK (espero que ese no sea el caso!) if the full orders are not subscribed then the money has to come from somewhere else which means we will be putting the actual backing plan into action and raiding the pension fund to do so.

Impairment or bad loan provision (call it what you want, a good term in simplespeak is ‘the bit where things are going wrong’) is expected to be 0.6% for the year up from 0.45% last year, next year they feel it may rise to as much as 1.1%, many commentators feel this is too conservative.

Meanwhile the ISEQ opened at c. 2717 which is about a 75% fall from its peak in 2007, banks have accounted for a massive portion of that loss in value. It seems that when an index is getting kicked up and down the street the ISEQ is the index that just keeps giving.