Are Irish banks the most generous in Europe?

Mortgage rates are rising, but at the time of writing they are higher in Germany than in Ireland, that isn’t the strange bit though.

What’s really strange is that the risk free rate in Ireland is higher than the mortgage rates available. In other words, financially speaking it is safer (if by ‘safe’ you mean accepting a lower return) to lend to a person in Ireland on a house than it is to lend to the Irish government. This is insane and it won’t last.

The response will need to be one of two things.

Take a look at government bond yields from last week, if a bank has a choice they can lend to the Irish government at 2.8% but they lend to people at closer to 2%. This is typically seen as an impossibility in financial markets so it will only last for a short time because as a rule there is no arbitrage, markets close them down once they are discovered.

I asked an industry source for their opinion, they replied with the below:

The 5 year Irish bond yield ended last week around 2.36%. If banks lend 5yr mortgages around 2.5% and  swap it back to floating so the banks are making no money on new lending (14bps), that isn’t enough to make a loan wash its face.

This is why UK banks are pulling offers on new mortgages as customer new lending rates in the UK are not rising quickly enough given the movement in the UK comparable swaps.
Nat west would lose c. 100bps on new lending at current rates.

So yes, Irish new lending will slow or the banks will have to raise their front book or new lending rates or both.

The positive which the consumer does not appreciate is that the banks have been very good so far on this…and not tried to “screw” customers. i.e. they have not risen their rates yet!

The other offset is that they do have very sensitive balance sheets…..to higher rates in Ireland so the larger banks may be in no hurry. The smaller banks (who are wholesale funded) are under more pressure to raise.

This explains why we saw the non-depository lenders in Ireland coming out to raise rates first, it’s a natural byproduct of funding markets, to think that anything else would happen is to believe impossible things (which only the Queen of Hearts can do). 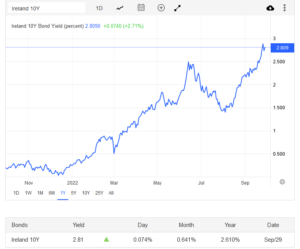