An alternative to health insurance

Problem: I received a renewal notice for my health insurance this week, and I got to thinking that the state facilitate health insurance in a manner that takes choice away from the individual [insurance companies only deal with certain hospitals/procedures etc.], that perversely has a loading on companies who insure younger people (why don’t they do that with car insurance and let older people subsidize young male drivers!?) in order to make the system ‘fair’ and lastly, that drives millions of Euro into the the hands of providers while creating an additional layer of administration in the health care system itself (none of which goes toward actual medicine or nurses/doctors).

Why doesn’t everybody have health insurance? While the papers will extol the issues of people who can’t afford it, the reality is that many people who are not covered opt not to take it out. They aren’t all bullet-proof 19 year old males with nothing to lose either, many simply don’t see the point, or they haven’t seen the need, taking out ‘insurance’ is perhaps the wrong approach.

Solution: Let people put aside money every month into a special savings account, a healthcare account, which can only be debited via a healthcare visa/mastercard.

How it would work: A person can lodge money on regular basis or by lump sum deposit as they see fit with maximum amounts in line with maximum pension contributions. When they lodge money they can then keep a track of their balance via online banking, the contributions are tax deductible to the same degree that regular health insurance contributions are. The person can then spend the money on their own healthcare as they see fit, it is a way of ensuring people who may want to receive private treatment can do so without having to take out health insurance.

There are people who get sick often, they have a high motivation for having health cover, then there are those that don’t but who buy it out of fear (me for instance). The ‘fairness’ of the system can seem lacking, and there is no residual value for not getting sick during the time you are covered. 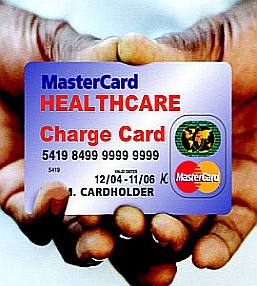 Allowing a person to take control of this and have a healthcare account would mean that people feel that their money is still ‘theirs’ and they can provide for hospital bills/GP’s as required. If there was a large sum built up toward retirement perhaps that could be transferred to their pension with a minimum requirement left for old age healthcare (in the same way an AMRF is taken out on pensions to ensure there is money left over after age 75).

The obvious flaw is that a person could (in theory) spend the money on a car instead, which is where control comes into play, Revenue would need to have audit ability on the accounts from the outset, but more exciting is the fact that credit card companies have some of the best anti-fraud software in the world, if they saw a non-health spend occurring they could raise it to revenue and they could respond accordingly.

Contributions could be via a payroll deduction where required (so you get a tax cert allowance at the start of they year, or something similar to an RAC when you make one off contributions), then attach the fund to the credit card, the card would need to say ‘health card’ and it would be an offence to accept payment with it for any non-health expenses, health providers would be required to accept it as payment (chemists, doctors, sports injury etc.).

Any company that knowingly takes payment for a non-health item would have to be fined, and there is the issue of dealing with online payments/cash withdrawals etc. The best part is that it is totally fair to the owner, and nobody tends to ‘rip off’ themselves, it would mean up front payment for the hospitals and removal of pointless additional work in maintaining scheme payments.

One of the failures in social schemes that have little uptake is that you have two choices, you either make them mandatory (as they will with pensions) or you get the incentives aligned correctly, when it comes to healthcare the main issue is the latter.