AIB Interest Rate Hike: How much? To Who? What’ll it cost?

Yesterday AIB increased interest rates for both existing and new borrowers. This comes as a huge blow to consumers, in particular given that the consumer is the same taxpayer who has done so much to bail out the bank. Do people have the right to be angry? Hell yeah they do!

The move has been coming for quite some time, we have been harping on about this for over a year, the most recent prediction was to put a time-frame and figure on the hikes, stating that it would start in Q1 of 2010 and in the course of the year we’d see c. 100 basis points or 1% of an increase across the board with a further 50 basis points or 0.5% in 2011. Today’s Independent has stated that we can actually expect all of it in 2010.

Why is this happening?

Simply put, the banks are not charging enough to cover the costs of loans that are not performing. In a way you could think of it as the people who are able to pay are paying for those who can’t, the banks need margin to absorb impairment, a situation that was brought about by reckless lending and borrowing.

This isn’t linked to NAMA, which is there specifically for commercial loans, this has to do with the residential loan books of banks, currently there are about 30,000 mortgages in serious arrears, nearly 7,000 have not made a payment in a year (greater than 12 months in arrears) and many more are crossing the delinquency Rubicon of 3 months in arrears in a daily basis. What is stopping this from being a bigger problem? Mortgage Interest Supplement, savings, family support, and forbearance by the banks.

Reckless lending deserves a comment, banks lent money to people who probably should never have qualified in a conservative traditional banking environment, that is a given, we all know that. The truly reckless decision though, was where banks gave up any cost control in the future…. Imagine owning a newsagent and agreeing that come hell or high water that you would never charge more than €1 for a litre of milk? Sounds stupid? Well, that’s exactly what our banks did in the widespread distribution of tracker mortgages, they effectively gave away their ability to control their margins in the future, in banking that is a HUGE error.

The cost of funding has increased for banks, the rates they have to pay in order to compete are historically high when compared to lending rates, they are caught in a perfect funding storm, harried on one side by foreign competition who don’t have a payments system and branch network to operate, on another by a public and political pressure-cooker which threatens to blow if they price risk appropriately, and lastly by a bond market which doesn’t trust them and is charging higher prices for the use of their money unless there is a sovereign backing to the security (LT2 AIB bond has a 10.75% coupon).

In this mess you have bankers who are afraid of causing further scorn – don’t forget, most of them live here and are not planning to emigrate once they retire – and a perception that in bailing out the banks that in return we can expect a price promise, or that they will give the public preferential rates, sadly this couldn’t be further from the truth. 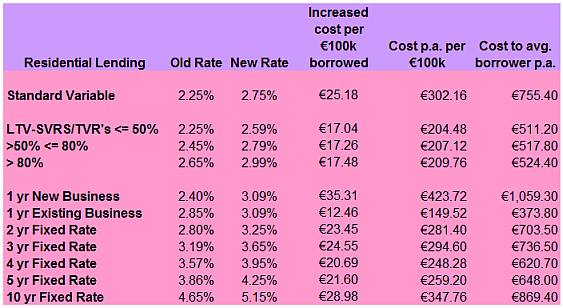