What do Greece, Venezuela and California have in common?

Sadly, it is that they are all in the top ten list of the most likely bond defaults in the market at present. The people at Credit Market Analysts have compiled the list (below) and the CPD (Cumulative Probability of Default) for the State of California currently places them in the top ten. 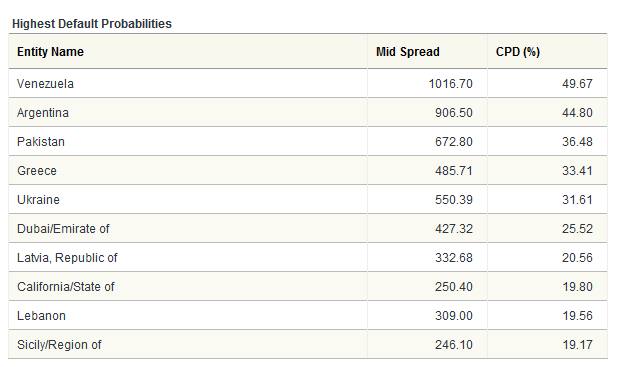 This is the first time that the State of California has featured in the list, and it could present some fairly unhappy news for the state which is in the top ten economies in the world. The state is responsible for 13% of the USA’s GDP and historically their Gross State Product was over $1.8 trillion.

A default by California isn’t the same thing as New York’s default in 1975 because that wasn’t New York State it was New York City and the default never materialised, rather they came about as close as you can get to a default without it actually happening. It was only prevented by the Unions, and while this may seem noble, one must remember that union members are amongst the largest beneficiaries of the City of New York so it was an investment in their own future.

The world was a different place back in the 70’s, there was such a thing as austerity, Gerald Ford said that New York’s spending was an ‘insidious disease’ and that there would be no bail-outs for the city, the Federal responsibility would only be for essential services – which may not have included schools. Ford promised to veto any bill supporting a bail out.

If California defaults they will end up aiming to get the money from businesses (which will perhaps cause a net outflow of companies to other jurisdictions) and the wealthy (of whom the top 3% already pay 60% of the states income taxes), but at a time when incomes are slumping and companies are struggling to survive that might not work out. They’ll need to find the money somewhere though because they can’t opt out easily.

The California Constitution mandates that state tax revenue must go first to pay education costs, and second to repay general-obligation bond debt. All other expenses are subordinate to those two. Imagine what that means? It means all unfunded liabilities, state employee wages (minus teachers who are part of the education spend) and everything else will be in line after the bond holders and schools.

Here are some of the highlights of Ford’s speech “When New York City now asks the rest of the county to guarantee its bills, it can be no surprise that many other Americans ask why? Why, they ask, should they support advantages in New York that they have not been able to afford for their own communities? Why, they ask, should all the working people of this county be forced to rescue those who bankrolled New York City’s policies for so long – the large investors and big banks?”

It doesn’t sound entirely dissimilar to the sentiment we hear today regarding our own banks and bank bond holders.