Unless you are a cash buyer it isn’t a good idea to focus on property as a single cost, in a transaction there are two costs, that of the asset and then that of the finance for the asset purchase. I have done a few comparisons on costs where in two years time where a property has fallen a further 20% from where it is today.

As we expect margins on lending to rise considerably we have factored that in, along with moderate base rate increases. What we have done here is to take a view that prices may have fallen 40% from the peak to now, but they will fall a further 10% p.a. for the next two years, a further 20% from today or over 50% from the peak. 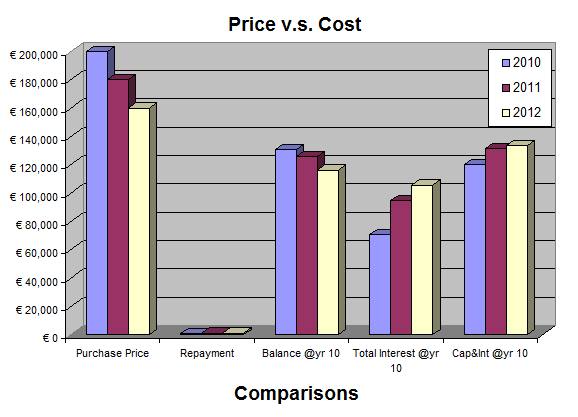 What we can see is that the price of a property is one thing, but the cost of it is another, the price is dictated on the day of purchase (signing contracts really but in effect when you close), but the cost for non-cash buyers is dependent on the interest rates involved.

We can see that if margins (using the 10yr fixed rate) were to go from 350 basis points to 500 (which is only 1.5% more and totally reasonable within the 2-3yr time frame) while base rates moved somewhat conservatively as well that the reduced price doesn’t save that much in terms of monthly costings, in fact, the gain on the reduced capital sum is virtually the same as the additional cost, but (for me anyway) I’d rather have increased cash flow versus having a reduced capital sum – within reason of course!

Could this really happen? Take a look at the Euribor yield curve below, it is pricing in rate increases, but because this is market based and not from the ECB itself we can only use it as a guide, having said that, it is a guide based upon millions of transactions so perhaps it is as ‘real’ as it gets. 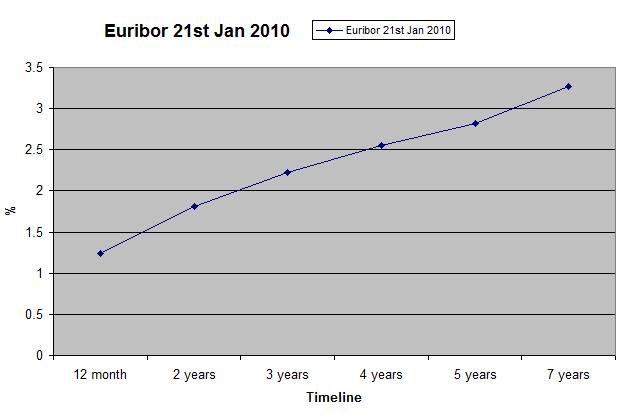 That banks will increase margins is a given, and people have a tendency to believe rates will stay low and they don’t look across the curve, if they did then lots of people would have been fixing their rates in 2004 but instead they went for fixed rates predominantly from 2005 onwards when rates were in an upward cycle and the upswing was already priced in! The reward for huge groups who made that decision was not only negative equity, but a higher financing cost in the process!

This doesn’t mean property is in some widespread recovery, but it is a reminder to people that ‘property prices’ are not the only consideration in buying, if you could book a rate today and get it in two years that might be ideal, but because that isn’t possible then don’t forget to consider costs as well as prices.