The main goal of Fannie Mae and Freddie Mac is to give the national mortgage market some liquidity. They purchase the loans from the mortgage firms (only under strict standards with size, credit score, and underwriting). For the next step, they package up the loans into Mortgage-backed securities, which they guarantee the payments on the securities to the investors even if a mortgage defaults.

These standards led to a more reliable ad sustainable mortgage products with longer terms and fixed-rate mortgages. On top of that investors knew that even if a mortgage defaults in their invested security, Fannie and Freddie will supplement the payments to them. Which made mortgage securities seem like a safe and sustainable investment.

Fannie Mae was created in 1938 in part of the New Deal Legislation to help with the housing crisis during the Great Depression. The goal was to buy all the FHA-insured loans to help recover the lenders’ money supply. It was originally apart of the Federal Housing Administration (FHA).

Freddie Mac was established in 1970 to keep the supply of money moving for mortgages to help middle-class Americans. It was to help expand the secondary mortgage market alongside of Fannie Mae.

This was a smooth and continuous process until the late 1990s. Wall Street started purchasing and securitising loans taking a chunk of the mortgage market share away from Freddie and Fannie. Losing around 20% of the total mortgage market share, it led them to a few mistakes they would regret. In 2006, as the housing bubble was at its biggest, they began investing in these subprime securities that the credit rating agency falsely declared low-risk. Not only that mistake, but starting lowering their standards on their Alt-A loan purchasing. An Alt-A loan is usually given to individuals with good credit and fairly high income. It did require little to no income proof however, which led to fraud. Fannie and Freddie later found out that was a huge mistake.

When the financial crisis hit, Fannie and Freddie was not in possession of enough capital to sustain all the defaulting mortgages. Around half of their losses resulted from the Alt-A loans when Alt-A only had 11% of their business. When the house prices began to fall after 2008, they didn’t have another market of business so they suffered from that as well. On risk of bankruptcy and disrupting the whole mortgage market the US Treasury Department bailed them both out for around $189.5 billion combined of taxpayers money. Now they’re under a government conservatorship that allows the government to oversee the operations of both Fannie Mae and Freddie Mac. 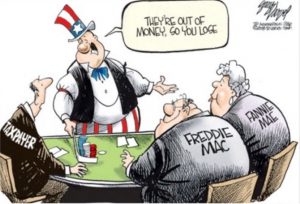