‘Landlords are bad’, I don’t believe this but the general take on it (in Ireland anyway) is that on some level they are. I don’t know if this is because they hold sway over the place a person calls home for renters, or if it is based on some fact as yet unknown.

One of the most common complaints is about deposit retention, but often this is analogy rather than based on actual numbers.

The actual facts which we can track tell a different story. The Private Residential Tenancies Board (PRTB) figures show that out of 230,000 registered tenancies there were only 958 ‘deposit retention’ cases (2010 annual report).

This represents less than 0.5% of tenancies. Of those 958 cases it broke down like this… 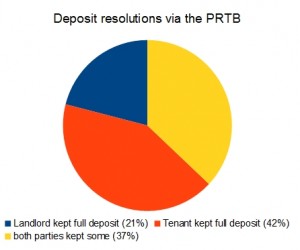 Depending on how you like to look at a chart it can tell you one of two things, that either landlords are generally in the right, or that tenants are. In at least 20% of cases the landlord was fully entitled to deposit retention.

In 42% of cases they were not – and that is worrying because it likely demonstrates that some people don’t know the law surrounding tenancies despite being a landlord. It will probably be a case that some day we will have ‘landlord CPD’ or something to that effect which attempts to make sure people are up to speed.

In the third instance neither party was fully right or wrong, because we don’t know the breakdown of this third party it could be that landlords come out smelling like a rose (or not).

The fact that 72% of PRTB complaints initiated by renters were about deposits is interesting, it seems to be THE singular issue when it comes to complaints. It costs virtually nothing for a tenant to complain (the PRTB is not funded by all beneficiaries, rather it is one sided and funded by landlords).

When you look at the complaints raised by landlords you it changes, rent arrears and breaches of tenant obligations are (combined) 68% of the complaints.

Of the 2,230 complaints received in 2010 59% came from tenants, 37% from landlords and 4% from third parties. So what seems to be the case is that people disagree – with shocking regularity and often on either deposits or payment of rent. Perhaps there is a case for a 3rd party escrow account?

The big gap in information is around the determinations – we see figures for the Deposit retention cases, but none for the landlord complaints, so there is no way of knowing how those all turn out!

And perhaps most fascinating is that we often hear about ‘slum lords’ with old dilapidated buildings who keep people in miserable circumstances. The upside of a building boom is that much of the infrastructure remains and the stock is better than it was in previous decades, of the complaints made only 5% had to do with the quality of the property – given that we have no breakdown (for instance a complaint made while awaiting flood damage repair could be genuine or frivolous depending on how it is being dealt with.

So we either don’t have a renter class consigned to a future of sub-standard accommodation or if we do they are not complaining about it.