Will housing for all work?

Ireland was in housing crisis before the Covid-19 pandemic, but the situation has worsened due to the pandemic. The housing crisis was caused by high unemployment,then because property is sold preferentially to profitable companies and rents have increased more tha 60% since 2010.

Right now, Ireland’s housing system is not meeting the needs of enough people:

Because of that The Government came up with Housing for All plan. Housing for All is the Government’s new plan how to decrease homelessness in Ireland by 2030, and it was published on 2 September 2021. This plan is intended to support homeownership and increase affordability, increase social housing delivery and support social inclusion, increase new housing supply and adress vacancy and efficient use of existing stock. Government believes it can embed environmental, economic and social sustainability in housing system for future generations. The State will invest more than 4 billion euros in construction each year to 2030. Over 300 000 homes will be built (90 000 social homes, 36 000 affordable purchase homes, 18 000 ‘Cost Rental’ homes and 170 000 private homes). 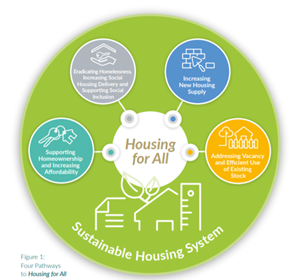 The Goverment devised a similar plan in 2016, it was called Rebuilding Ireland Strategy. It cotained a similar strategy to this new plan (improve the rental sector, to adress homelessness, build more homes, etc.). However, the plan was a great disappointment.For example from July 2016 to September 2019, homeless did not decrease, on the contrary, it was rising. The social houses to be provided were not built (to give you an idea, about 5 000 houses were to be built in 2018, but only half of this amount was delivered).

Then in 2018 the Affordable Housing Fund was supposed to deliver 6 200 homes to rent or buy over a three-year period, but again it did not happen. This project was even bigger failure. In 2019 and 2020 no affordable houses were delivered and this year it will be only eight.

This article is by Nicola Lancova who interned with us from the Czech Republic, her college is here.