The value of ideas 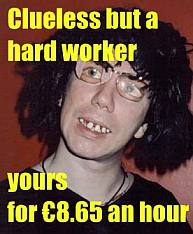 When you hear about ‘ideas’ sometimes it’s as simple as minor inspiration, other times it is a total awakening the way Sir Isaac Newton had when an apple fell on his head. That ‘idea’ lead to the the basis of understanding gravity.

The idea of E=mc2 was merely an idea, Einstein had that one, the work it took Oppenhiemer to turn it into a nuclear bomb might have equalled many lifetimes of toil in the effort but without the idea they would have spent much longer running around in circles, or worse still not running at all.

While one could argue that ‘ideas’ of themselves are useless without work and follow through, but lets look for a proof by contradiction. Can you have a result without an idea? No.

Would we have nuclear bombs without the idea set forward by Einstien? No.

An idea is like a seed, if you plant many seeds some grow some don’t, and others not only grow but prosper and adapt and become far more than what one thought they had the potential to be. Martin Luther King had ideas he described as ‘a dream‘ these ‘ideas’ went on to be the basis of an end to segregation.

Thomas Edison (perhaps the greatest inventor of all time) said inventions are 1% inspiration and 99% perspiration, however, without that vital 1% the other 99% would be pointless toil, in fact the ‘perspiration’ element would not exist without the idea.

If you look at the link two paragraphs above its about ideas merely being a multiplier of work put into them. The flaw is the  absence of a zero value, in every instance there is an assignment of positive or negative which to a numbers based guy like me doesn’t stack up.

In that article ‘no idea’ is not covered and should have a value of zero, I would argue that no execution should equal zero too because execution to ideas is like fertilizer is to a seed.

The point to remember is that seeds and fertilizer, or ideas and execution can exist independently, but the vital fulcrum is the idea itself, that is the egg, the very essence of all that comes after it.

no idea x brilliant execution=nothing.   brilliant idea x no execution= €20 which is still better than nothing, however, let us apply zero value to no execution

Personally I’d rather have a grand in the bank than minus ten million. It is true, you can’t log into an idea, but if you take something you can log into it had to have come from an idea, if it didn’t then describe the thing you are logging into? That is a zero sum question.

Ideas are real, thoughts become ‘things’, you can patent an idea because it is a form of property under intellectual rights, if it was meaningless you couldn’t patent it and protect it.

A man with a million ideas has the potential of infinite wealth with a little work, a man willing to do lots of work with no ideas or bad ones has infinite potential for a minimum wage job and an eternity of asking ‘do you want fries with that?’.