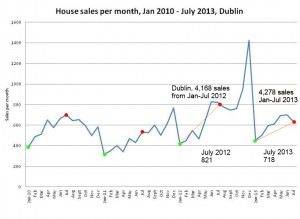 I suppose that comes down to what you call significant, if you are looking for any trend activity then take a look at month on month figures from each year to look at it in relative terms (see the 2nd graph, and 2013 shows that it was the highest level of sales achieved for every month of the year to date with the exception of June & July, and in those instances 2013 was still better than 2011 & 2010).

Calling July ‘brisk’ is what stared some back and forth between Rob and I, and I must concede early that relative to last year it wasn’t ‘brisk’ it was worse and I was wrong. Relative to other years it’s ahead. 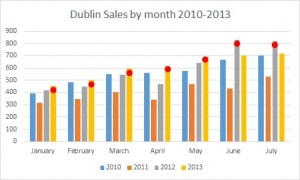 However, we have to remember that the idea that the boom was ever a healthy place is wrong “the sales figures reveals that the market is still a very pale shadow of the height of the boom.  The Dublin housing market consists of 527,665 units (in 4 Dublin LAs).  Normal market turnover would be 5-7% units (higher in a boom), meaning that we could realistically expect in a normally functioning market 2198-3078 sales per month.   So far in 2013 the average monthly sales is 593 (1.3% turnover)“.

I don’t have the foundation for the 5-7% figure *anybody who does please post it!* but think that the absorption rate on available inventory is perhaps the more telling figure. If the supply of desirable housing is going down while transactions are going up and there is also evidence of price increases then taken together you do have ‘non- b”£l$hit talk up the market‘ reasons for thinking there is upward momentum evident.

That the market can even show any non-negative months is interesting given the low levels of credit flow, should credit start to flow it will probably be a game changer. There is also the issue of using the mean monthly sales, because January which is always slow in every year recorded drags that down to the 1.3% of stock turnover, the median (which is no better statistically) of 614 is puts it closer to 1.4%, and also denies the annual trend evident for the last two years in which the seasonality has favoured Q3 & Q4.

Obviously TRS caused a spike in 2012 but we don’t know if there will be a year end rush in 2013, there are reasons to think there might be (another tax relief is ending). The one thing I think we all agree on is that we are a long way from ‘normal’.