The Labour party aren’t fooling anybody with their calls for ‘Rent Certainty’ to be linked to the consumer price index (CPI), unless the nation is populated by financially illiterate people which I don’t believe to be the case.
That is why it is correct of Fine Gael to resist measures which have already proven to be ineffective countless times in Europe and elsewhere.

We can take the sabre rattling of foreign investors saying they won’t buy here if we price fix as a given, and we can discount much of the clamour from the usual vested interests in property and instead focus on the economic facts (and fallacies) as they stand.

Firstly, why is it such a con-job? The main reason is that housing is only one aspect of what creates the ‘consumer price index’ and therefore it’s like basing the price of oil on the same thing, you can’t imply the cost of a specific item on the cost of a basket of consumables which are not related.

Correction, you can do whatever you like, it just doesn’t make any sense.

Cost bases alone have changed and facts like that have to be considered. In recent years taxation rules have changed, the introduction of Local Property Tax which cannot be offset against income is one such example that serves to create the lesser discussed ‘cost-push’ type of inflation because it constitutes a factor of the ‘production’ of rental housing (to you and me that’s ‘supply’).

In a constrained market is driven further by ‘demand-pull’ inflation which is more obvious but not the only factor at play.

If setting prices according to CPI were the correct answer to anything then price fixing of sorts should be introduced everywhere, what about if we did it with alcohol, fuel, tobacco or cars?

Of course such items will never have price fixing intervention as they are too lucrative as sources of excise, VRT and VAT, but rent certainty is broadly costless to the exchequer as they don’t suffer the consequences of it, that is why politicians entertain the idea.

They get to be generous on somebody else’s dime, to them it’s victimless largesse. They get voters and some faceless landlord pays for it.

Another issue is that if you really want to use CPI as the basis for such an unsound decision then it shouldn’t be done merely as a convenient starting point, why not look at how that relationship worked in the past?
The graph shows rents versus CPI over the last 15 years. 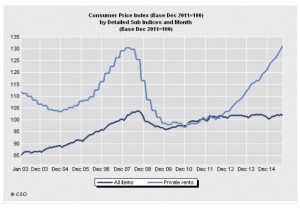 This would have meant that rents would be the same today as they were in 2011. Of course, nobody made such a call for ‘rent certainty’ (price fixing in non-political language) when rents were falling from 2007 and supply was abundant?

Equally, prices fell quicker than CPI in 2007 so what would be the case for landlord with ‘rent certainty’ contracts at times like that? Would they only have to pass on a smaller sum to the end user? That would also be wrong.

Funds and investors wouldn’t be buying here as they did had we introduced ‘rent certainty’ in 2011 as even with low prices the returns would be muted in such an environment and our current shortage would be even worse.

Equally, imagine the difficulty of policy facilitating rent hikes from late 2002 to 2004 because CPI was going up (while rents were going down). It wouldn’t work because people would just move, but that’s the left-leaning happy trap of this idea, prices can go down but they will rarely go up.

It does give huge protection to incumbents, but does so at the expense of everybody else creating a salvo for the anointed ‘chosen few’ while giving no regard to those who will bear the brunt of the ensuing pain of such a choice, namely renters who haven’t entered the rental market yet.

The kids who had nothing to do with the crash will already be crushed with taxes to pay for it, now we’ll ensure they face rental-austerity on top of that by driving up prices as further scarcity takes hold due to policies like this.

They will learn the hard way about the concept of ‘marginal pricing’, as their prices will be far above the protected incumbent price. Of course, politically, that is a secondary concern that can be fixed at a later day with some equally distortive solution.

If we do give in to economically ignorant solutions the price will be paid by the most vulnerable. In this respect I am a bleeding heart libertarian, only through facilitating more construction and making it viable can we hope to resolve the housing shortage.

The evidence from Germany, Sweden, France, and the USA shows price intervention eventually fails, and they don’t currently have the same industry constraints we are facing.

Remember, it was the same anointed ones who called for the ‘end of bedsits’ and all that achieved was to make thousands of vulnerable people homeless while not fixing the rented sector. These little experiment create hard costs for thousands of people – none of whom hold an elected officials office.

Attempting to price fix, or create ‘certainty’ when the industry itself is uncertain and cost bases are changing due to planning and construction laws is insane. The only thing crazier is thinking it would actually work.