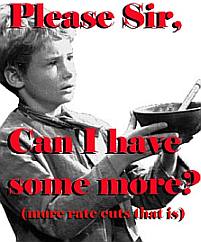 In the Book Great Expectations by Charles Dickens we saw Pip help out an escaped convict, one who had done some wrong, the convict later becomes an anonymous benefactor of Pip’s helping him lead the life of a gentleman and Pip becomes totally removed from the old life of poverty he lead, only to one day find out who his invisible helper was, it shakes him to the core.

There is something in this story that hit me today hearing about the Fed rate cut to a base of 1% and current public sentiment towards the market. The market is like the convict who had done something wrong in the past and who later is the benefactor. It is easy to look at the mistakes made by the finance industry, and alarmingly easy to funnel all wrongs towards it, but this same market is what brought us unprecedented wealth, the money from it gentrified the inner city of Dublin, and many other cities around the world. Our disgust in one respect is a thwarted world view, if you accept that markets made your life even 1% better then read about the ultimatum game and decide if they are good or bad.

The Convict in our economy is the same entity who indirectly is responsible for you having a job if you have one. No market equals no business equals no work.

The Federal reserve has now taken an extreme monetary position, the issue I would have with this personally is that monetary policy is happening in shorter and shorter cycles, the closest analogy I can come up with is that of a progressive drug user who uses a drug once every now and then but the distance between usage becomes shorter and shorter until they are hooked. The last time we saw base rates at 1% was in 2002 which is a 6 year cycle (as we are back at 1% today) previously to that rates were harshly cut from norms in the early 90’s as a response to the S&L crisis (Savings and Loans are the American equivalent of Building Societies), that was an 11 year cycle. The most significant prior to that was the 82-83 cut which was a 10 year cycle – see the graph below. 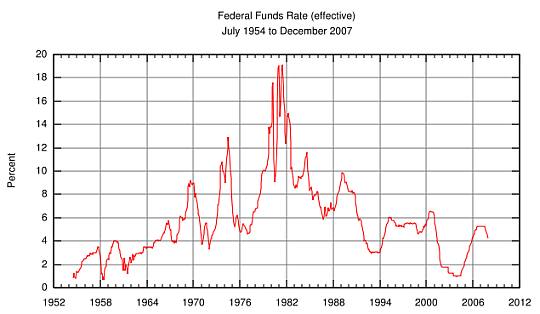 Rate cuts are seen as standard response to recessions, for instance after the 1987 crash there was a series of rate cuts that were then raised back up because that market crash didn’t result in a recession. The issue is that we may be seeing the peak to trough time-line becoming shorter and that means we are going to be living in a more volatile world, there is also a frightening correlation to war. Look at the graph and take note of the period during the Vietnam War, the first Gulf War, and then the more recent war in Iraq. 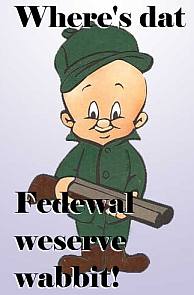 The question now is where will the ECB bring us in response? How far down the rabbit hole will they follow the Fed? I heard one prominent University economist say the thought the base rate may go to 1%. Personally I would feel that a possible return to 2% is looking more and more likely, that will result in asset inflation (which caused our previous property boom) but this time I think housing wont’ be included in the upswing in real terms, perhaps the master plan is to inflate away all debts.

What size will the cut be? It depends on the degree of concern in the ECB, a cut of 0.25% would be an expected message, a cut of 0.5% would probably get things going, a full 1% or more would give a serious stimulative boost but perhaps ramp up inflation too fast, we’ll have to wait and watch.

The focal point is that we are now in a period of rate expectations and those expectations from the markets, from the traders and from the man on the street are that they need to come down. Just be careful for what you wish for though because like all things in life there is cause and effect, action and reaction, lower rates might solve short term pain but it also has long term implications.

Savings and a return to prudent monetary and fiscal policy are important, but low rates actually cause the inverse because savers are not rewarded with security, instead speculators are and that brings us back into the boom bust cycle.