Postcodes: a prelude to property tax 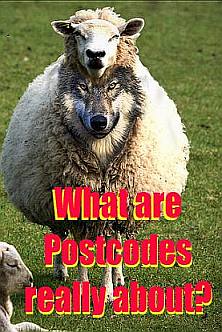 I think that the introduction of postcodes will usher in the foundation for property tax, and that the gains to be had from postal efficiency are not at the heart of the move toward a comprehensive postcode system.

Just to give the background to this post, the Sunday Tribune reported:

Residents in Dublin’s coveted D4 addresses have only two years left until their exclusive postcode is renamed by the Department of Communications, as plans for the new postcode system are finalised by Minister Eamon Ryan. The department plans to issue tenders for the system by Easter, but a delay has meant the code will not be in place until the end of 2011, and not early next year as planned.

Under the new coding system, areas such as Dublin 4 and Dublin 6 will be renamed under a new six-digit system, such as D04123 and D06123. However Labour’s spokeswoman for Communications, Energy and Natural Re­sources, Liz McManus, said the latest estimates for the new system show it will cost a minimum of €40m.

McManus has also said businesses will suffer further financial hardships as they will be forced to change their address records and data.”This is not the time to be implementing this system, and it appears to be nothing more than a vanity project for the minister.“

What does this have to do with Property Tax?…

In the budget speech Lenihan alluded to the coming tax on property, this quote is verbatim ‘In the Renewed Programme for Government we have accepted the recommendations of the Commission on Taxation on the need for a property tax. Considerable ground work will need to be done before a Site Valuation Tax can be introduced. Work will shortly begin on the registration of ownership and the valuation of land‘ (emphasis mine).

The idea of a ‘Site Valuation Tax’ means that a property isn’t taxed on what it will sell for, rather it is taxed based on the value of the site it sits upon, essentially the footprint of the property, and this is where Liz McManus is missing the point – if we have comprehensive postcodes breaking areas down into small parcels then you can start to apply a site value with meaning.

I like to use myself as an example, I live in Donnycarney in Dublin 5, suffice to say the value of the site I live on is nowhere near as valuable as the sites of my not to distant neighbours in Beaumont or Raheny, so you couldn’t have a site value tax for ‘Dublin 5’, but if that were to change, and instead my postal code was me and every house within 100 metres then it would make absolute sense to value them all the same (from a ‘site’ perspective).

It would also mean that maintaining a national database on property site values would be far more simple, without them you would have to figure out the actual transactions in an area, see if it was comparable or not and test for proximity and other factors, it would be a quagmire. However, with smaller parcels you can use the average for surrounding parcels as well as transactions and other measures to get a really accurate non-distorting site value (there would be marginal distortion such as where a less-desirable neighbourhood meets a desirable – my own neighbourhood being a case in point where Donnycarney borders Clontarf, it would be important to have some small tinkering to take account for circumstances, but by and large huge tracts of land could have a common postcode and broadly common value).

Far from postcodes being a ‘vanity project’ they are fundamental to a rationally and well working database that can be used to get a letter to you, but also to impose a property tax.

Doubt it? O.k., then be cynical with me for a moment and ask ‘Do we have a badly functioning postal service where letters are regularly lost?’ (if you are in debt collection you might believe that to be the case!), do we need to get post to people quicker than we used to? And with the new codes, will it speed up the process or increase efficiency? Is the post office going to do away with half of their work force due to some new found efficiency? And most importantly, in a year where every expenditure going is being slashed, would €40m not make one hell of a difference to some pertinent project?

Unless you have your eyes closed then the push for postcodes ought to be screaming out the obvious at this stage…. postcodes = property tax.

We don’t need a better postal system, we won’t get to send letters for less due to postcodes. In terms of function, I have tested it several times, it works, really well actually, in fact, if you get an envelope and write on it ‘Karl Deeter, Dublin’ I’ll still get it. That’s how good it is, fact, so why all the effort to re-invent the wheel? Unless it’s really about something else?