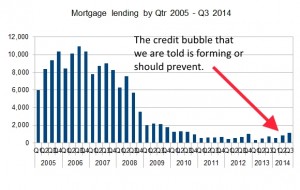 How can this be interpreted as a rising risk? The rising prices are a separate issue, but that some wave of credit is ready to swamp down on limited supply denies the fact that most of the market is in cash and that marginal cost is not the same as average cost.

The gross number of loans was subdued last year and what Honohan did was make an inference that it was no big deal. The number of loans is expected to rise to a normal level which means far more than the 2,800 will be affected. 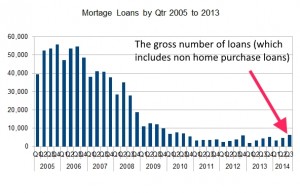 Then you have the people who may be in the latent supply who will be affected but who don’t show up in the figures just yet for various reasons such as not having equity or because switching was closed off by many lenders in the recent past which ensures 2013 is a bad base year for comparison to anything.

They do say that people with negative equity won’t be affected on the negative equity part of any new loan, but a new loan will have the LTV rules, that will impact on them.

Switchers who are high LTV will be affected but the switcher market was closed in 2013 so you can’t take anything from that. The mover-purchaser will also be in the same cohort competing for credit that is not readily available. All said, this problem will be bigger and the Central Bank Governor knows this but wants to play it down in order to get the policy passed because once it’s done and people see how damaging it is you can’t easily undo it.

With the Central Banks being the ones who impose loan deposit rules it would mean that a wave of credit would require a wave of deposits, equally, they could change the existing rules on stress testing which would have a prudent effect without getting into the ‘crude tool’ spectrum.