It's getting chilly in Iceland…. recession card played 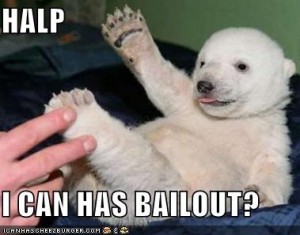 Iceland has seen the Icelandic Krona get pummelled recently, on the currency markets one trader said that they could not get into any forward market, there were spot transactions available only, the currency dropped over a third. They suspended trading last Thursday after Kaupthing Bank followed its peers (Landsbanki & Glitnir) into domestic ownership. The Icelandic government were waiting for an answer from other Nordic banks about help but that didn’t come and in the end the Russians were drafted in bringing €4 billion with them.

Landsbanki operated the popular ‘Icesave‘ account, when going into receivership UK depositors were told they would only get the guaranteed amount of £50,000 but the FSA has since stepped in and guaranteed all money that was on deposit using terror laws in order to gain access available money – which was moved across to ING Direct, UK taxpayers will foot the rest of the bill. This has brought relations between the UK and Iceland to the lowest since the 70’s ‘Cod War‘. The UK is also threatening to ‘sue’ Iceland.