How Do American Mortgages Work? Part 2: How the Secondary Mortgage Market was Created

Like the housing bubble in 2008, there was a growing popularity in the residential housing market which therefore created a housing bubble throughout the 1920’s. Before the crash, there were four common financial institutions to obtain a mortgage from: commercial banks, life insurance companies, mutual savings banks, and thrifts. These would typically have 5 year balloon loans or 10 year amortization loans with families having a hybrid of the two loans.

The Great Depression started by a stock market crash in 1929, there was a huge economic downfall that lasts for 10 years spread throughout the Western world filled with great disparity and no work. By 1933, the economy fell 27%, unemployment reached 25%, and wages fell 42%. The Great Depression was not just affecting Americans but the banks as well. Laws preventing banks to invest their client’s deposits were not in existent yet so a majority of the banks’ money were in investments. When the stock market crashed the banks’ money went along with it. With the Economic downfall left little to no income for most of the families, leaving many of them to forfeit their mortgages. The stock market crashing and the mortgage default rate rising was a perfect storm for the banks. It left the banks with no other choice but to close their doors. As banks were closing a nationwide panic went across America. Everyone running to their bank and withdrawing all the money from their accounts. This led to more and more banks closing throughout America leaving thousands of families without their life savings and the money the entrusted with the bank. 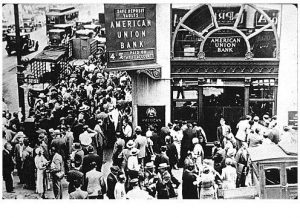 Mortgage lending after the bank crashes was almost unheard of. As a response, the federal government created a deal in 1934. This was to attempt to build the economy back up to its former glory with giving lenders more freed capital so banks can lend more. The new deal was to establish a secondary mortgage market where investors can buy mortgage-related bonds and securities. Which led to establishment of the Federal National Mortgage Association referred to as Fannie Mae. Mortgages became stricter turning to a normal loan of 15 years then to 30 years with a limit on how high the interest rate can be to insure another event like this wouldn’t happen again. The creation of this secondary market revolutionized the mortgage lending industry and is the reason why the mortgage market is so massive in the United States today.