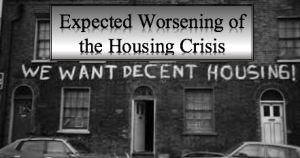 Although the Department of Housing has set a target of 48,000 new homes to be built by 2023, this target could be missed. If the target is completed or surpassed then burdens associated with the housing crisis could be significantly reduced. The problems that could be reduced would include reduced homelessness and new homes would create more supply for social and affordable housing. However, if homes were to be sold at current market values then the impact on reducing homelessness would be drastically less significant.

Ultimately, the local authority sector can be doing much more in order to help reduce the associated issues with the housing crisis. Not only has the housing crisis caused issues of homelessness, but this homelessness issue is causing adverse effects on children impacted by homelessness. There is increasing acceptance of possible psychological problems caused by the displacement of stress from parents to their children. Children have also been shown to pick up on parental stress which is shown to affect the development of a child’s brain.

The housing crisis has presented many issues that were not expected. The massive increase in homelessness of families with children has created horrendous experiences that many people must go through. Local Authorities must consider helping manage the housing crisis in efforts to reduce the traumas Ireland faces. It is the duty of the state to take greater actions in reducing the immense effects of widespread homelessness of families and children throughout Ireland.