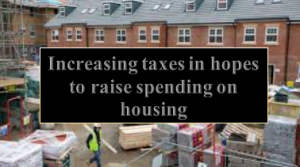 Countries in the EU that have progressively developed more stable housing and social housing taxes and tax revenues are comparatively much higher than Irelands. For example, Denmark has established housing that over 22% of dwellings are social rented. Denmark’s tax on income and wealth amounts to 29.7% of their GDP and tax on individual or household income equates to 25.4% of Danish GDP.  Denmark exemplifies a similar country in the EU where the housing market has undergone massive price increases for property prices and market rents. Recently, Denmark’s housing crisis has become reduced and housing is now relatively more functional and accommodating than in the past.

The significant differences in tax revenue composition of the Danish GDP signifies how possible increased taxation could help boost government spending in an effort to reduce the implications of the housing crisis. Denmark also is one of the countries that spends the highest share of household expenditure on housing. Denmark devoted 28.7% of household expenditures to housing, while Ireland spent just under the 24.2% EU average of expenditure on housing.

The Organization for Economic Consideration and Data shows that the total employee tax wedge for a single Irish person on the average wage as a percentage of gross wage is almost the lowest in the European Union.

Substantial evidence provided by NERI reveals the need to increase tax revenues given the additional need for support in housing. However, many pre-budget submissions from employer groups and corporations are requesting the government to cut capital gain taxes. NERI rejects this belief and urges the government to push for greater taxation and greater spending.