The Federal Reserve released their Flow of Funds report recently (btw: for people using twitter @capflowwatch is a guy who blogs on this regularly).

The image below is taken from Econompic which is a site specialising in visualization of data.

If you look at the different time periods you can see a shift in where the debt was focusing and that tells you the secular trend at the time.

89-99: During this time we saw the seeds of a housing bubble begin while every other sector deleveraged.

99-07: The big yellow line on the left is the capital flow showing the housing bubble, mortgages grew to 75% of US GDP, this kept consumer debt in check during that time (the home was used to finance credit instead). Businesses levered up and on the Federal level deleveraging continued

07-09: Everything was wiped out with the exception of the Federal side who were again levering up, this is evidence of a counter cyclical approach in action but perhaps it is also evidence of a new and different bubble forming? 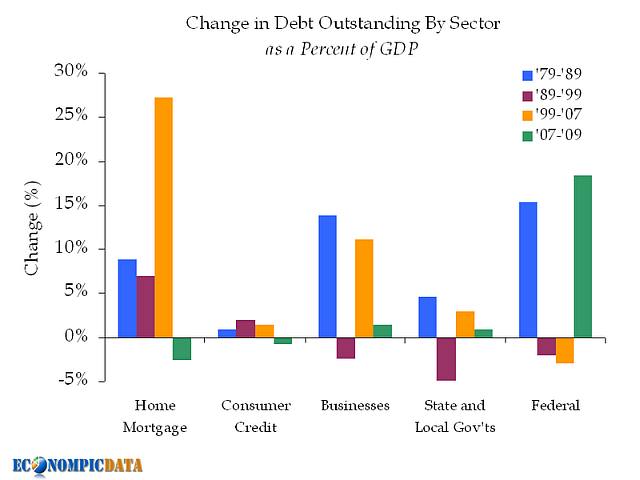