We are going to look at the Euribor yield curve today considering its moves from 20th of June against two dates in August with a view to deciphering what it means for rates in the Irish residential mortgage market. 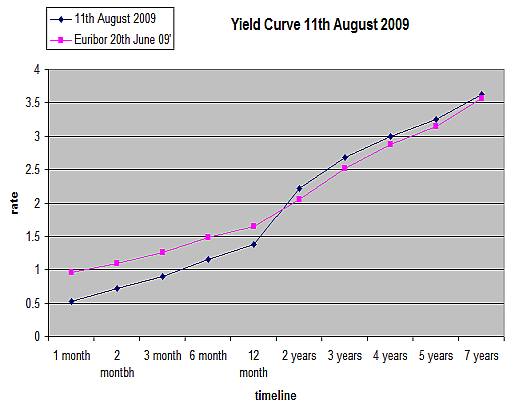 First of all we see that the June vs August lines on the 11th showed a drop in short term rates, this would normally imply an increase in liquidity (generally) as well as a lack of inflation expectation until circa the 2yr mark at which point the blue euribor line trends higher. We would take it that the expectation is for low rates to prevail for the next year then rise to about the 1.5-2+% range. Moving on to the 24th of August we can see that the expectation of low rates remains, and thus, compared to the 20th of June the line is still trending below the base rate on the 3mth money (which is what banks generally rely on). Then the two lines sync up, and that would imply that some of the scare is gone from the inflation argument (for now) but nonetheless the rate expectation is higher from the 2yr mark.

What does it mean for mortgage holders or potential mortgage holders? Basically rates will increase, as already discussed in the past, variable margins will rise significantly, but the yield curve is telling us that fixed rates after the 1yr mark are going to start to go up, you can’t have the current fixed rate environment lasting for much longer. Does that mean you should take out a mortgage now or fix it if you have one already?

Yes and no, prices do have further downward adjustment and you need to determine what you believe that will be and then work out the margin difference over the life of the loan to determine how it might affect your overall cost of credit.

The story seems to be the same in the USA and the UK, short term low rates then a return to a healthy upward curve, below are the comparisons from the 6th of July to today for the GBP Libor and the US Libor, the only difference at the moment is that the US is factoring in higher inflation after 2yrs than previously. 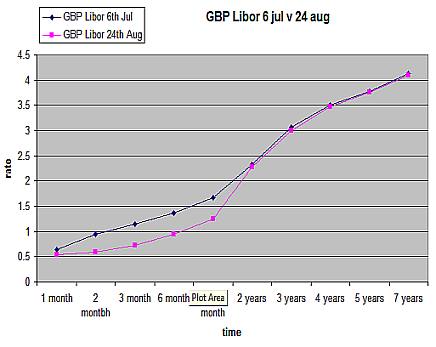 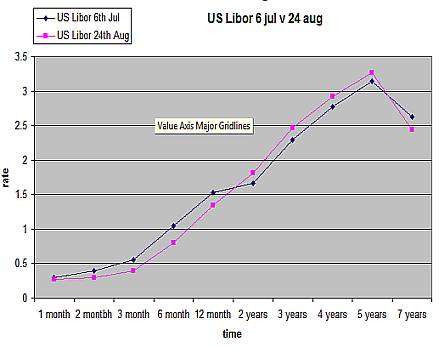