I plagiarised the chart below from Constantin Gurdgievs blog (which is brilliant btw) be sure to check it out. 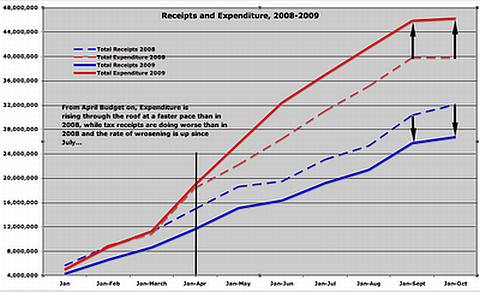 What we can see is a widening of the deficit which is partly cyclical but also due to our spending habits versus our income, that is sometimes referred to as the ‘structural deficit‘ or a ‘public service deficit’,  that shouldn’t be used as a stick against the public sector by default because it isn’t only arising from there, although public sector wage levels must be addressed because the costs in our public sector are heavily embedded and that presents a massive problem for making any adjustment given the percentage of spending that wages represent. Our property boom lead to a surplus which was rapidly spent, and ultimately it disguised a significant fiscal gap which we see emerging in the chart above.

The person who has given the most poignant thoughts on that matter lately in Ireland is (imo) Philip Lane of TCD who wrote about the direction the upcoming budget needs in today’s Times and also spoke at the recent DEW conference on Tuesday, and the message is clear: our government spending is too high for prevailing tax levels… It’s really that simple.

This is the reason that the government will need to fly in the face of what is considered fair, right, or just, because when your back is to the wall there is no option 2,3,4, and 5, only option 1, further cuts (econo talk for cuts  in 09′ is ‘adjustment’) and taxation. These are economic decisions being made by politicians and that doesn’t bide well for being popular or getting elected, so (at least for me) every time I see an article showing that the government is less popular it kind of gives me faith that they are doing what must be done.

The good news is that you can gain some comfort by knowing in advance that there will be some bad news, but that it will be the type of medicine required to get the country back on track and the sooner that happens the better off we all will be.