So why could the unemployment rate affect the residential property prices to such a degree? Firstly traditionally most properties (more than 70%, though at present this figure is nearer 50%) are purchased with the aid of a mortgage and an unemployed person is not normally successful in getting a mortgage.

Secondly when unemployment rates are low (less than 7%) people are confident of at least retaining their jobs and possibly gaining promotion or a new job with more pay, which provides grounds for optimism and a willingness to borrow to fund a purchase.

As the economy turned in 2008 and people started losing their jobs plus the uncertainty it put in people’s minds that retained their jobs, this removed a large cohort from the property market and influenced the movement of property prices downwards. 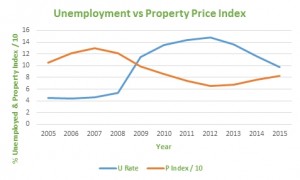