Background:
The Irish residential property market has gone from a period of spectacular growth, to a dramatic crash and lately to recovery in the past ten and half years (2005 – 2015) the period I will concentrate on in this article.

This is not an exhaustive list but it does show the range of factors that can influence property price movements with some having a much more dramatic effect than others. Here I will confine my analysis to the influence four key factors played on residential property prices in Ireland during the period discussed.

These are Unemployment, Migration, Exchange Rates & Sentiment. Firstly I will look at the property prices themselves and how they have behaved during the period.

In the early part of the period under review (2005 to 2007) property prices increased by 30% overall and hitting a staggering 14.7% annual rate in 2006. Property prices were starting to stall and indeed fall back in late 2007 and early 2008 before the financial collapse occurred in the autumn of 2008 with the collapse of Lehman’s triggering a major financial crisis across the world’s financial systems.

In analysing these figures David Duffy when writing a research note for the ESRI in February 2014 said “The CSO Residential Property Price Index shows a peak to trough decline in house prices nationally of over 50 per cent, with prices in Dublin falling by over 57 per cent peak to trough.” (Duffy, 2014).

However from 2013 residential property prices have started once again to show annual growth nationally with an overall growth of 25.3% in the past 3 years admittedly from a low base in 2012. These movements in the property prices are illustrated in the graph below which takes its figures from the Annual Index published by the CSO. (CSO, n.d.) 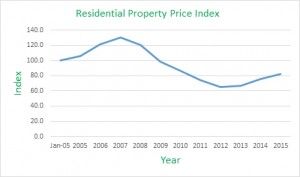