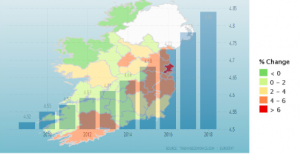 Demographic changes in population also present challenges in supplying more housing. Ireland’s population is aging. The 2016 National Census has confirmed that there has been a 19.1% increase in people aged over 65. By 2046, people over the age of 65 are expected to account for 1.4 million of the Irish population. So why is an aging population relevant in solving the housing issue? Builders and governmental agencies must heavily consider the demographics of the Irish population in order to accommodate all cohorts of the population. In other words, developing nursing homes and care for the aging population is extremely relevant to increasing the supply of housing.

House and occupancy family size are also a changing demographic throughout Ireland. Family sizes are getting smaller. According to the Greater London Area’s survey of housing, 150,000 fewer family sized are needed for the future in comparison to the last 20 years. Dublin is expected to follow the decreasing need for family homes. However, 65% of housing stock in Dublin are family homes, but only 37% of households have families with children. In comparison, most european cities only housing comprises of around 27% of family homes.

The Irish housing supply is very disproportionate for the needs of the city and overall country. The housing crisis will only be solved if developers and governmental agencies take action now in building homes that are accommodating to changing demographic needs. Action is currently needed to reduce the burdens of lack of housing supply.