A common tax myth about landlords

A tax myth that I have heard more than once has to do with landlords somehow price-gouging because they have a debt free property.

Most recently it was written in the Independent where it was stated by Aideen Hayden of Threshold accused landlords of ‘downright extortion’ because they have increased rents at a time when they have no mortgage on the property.

This is a logical fallacy, and a one worth debunking.

For a start, everybody has the right to charge prices and equally the state has a right to tax profits from various activities. In the case of landlords they have to make a tax return stating their profits and the more they make the more tax they pay.

In fact, the effective rate of tax on a landlords net profits is often about 65% or more. Don’t believe me? Play with this excel calculator and see for yourself. If you want to see how it works for a person who is mortgage free just change the mortgage amount to €1 and you’ll get the idea, even in that case they get more than 55%.

So any increase doesn’t just ‘fall into their lap’, the state is there as a main beneficiary – and worse yet, the need to raise rents exists in part due to unfair taxation to begin with (such as how much interest can be offset and that you can’t offset local property tax – which turns into effective double taxation).

Then, when prices were falling, nobody said anything, why wasn’t rent control or all of this unfairness mentioned before? See the graph of where prices have been in the past. Was there a call for rent control when they were falling? Of course not, where is the fun in that?! Of course, a person may be carrying forward rental losses (they’ll still pay USC on profits) and can offset them, but that is just like any other business, so the claim of ‘extortion’ is unfounded, and at worst, it does more for the exchequer than the landlord. 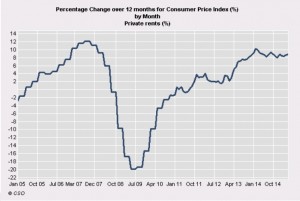