The Millionaire next door (book review) 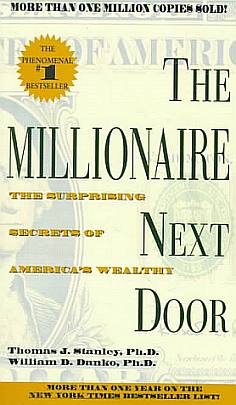 About ten years ago my sister bought me a book called ‘The Millionaire next door‘. This was when a million still meant something! In todays markets where Governments are throwing billions, and indeed trillions at problematic markets a million doesn’t seem like much!

However, this book is well worth a read, it covers many of the things that are effectively the ‘lifestyle habits’ of people who have more than a million in net worth outside of their primary home. One of the main tenets of the book is that you should spend less than you earn, so simple and yet so hard! It’s like saying ‘consume less calories than you burn’, which is also easy to say but hard to do.

The Millionaire Next Door is a good book for people to read when they are becoming financially independent, it helps to spell out some of the basic home truths about money by looking at the lives of people who have reached a high level of financial success.

Of course, money isn’t everything, it won’t make you happy, but it’s easier to afford the therapy hours when your minted!

The general habits of people who accumulate a high level of wealth are as follows:

1. Wealth is accumulated (by and large) over time, and done so consistently, as a part of the persons life.

2. A high percentage of the people were self employed.

3. Wealth doesn’t have much to do with your IQ or college, it has to do with being frugal enough to put money away faster than you spend it, having said that, this attribute is a form of intelligence! It is also about self discipline.

4. The wealthy are not flash, no flashy cars, most of them drove second hand cars. No trophy homes, or other big worldly signs of wealth.

5. They learned about finance and investing, not to the degree of being an expert but well enough that they understood what they were doing with their money and what their money was doing for them. There is a frightening lack of financial education in our schooling system so perhaps this book would be good for parents to buy for their kids.

6. Nearly all of them (97%) have a home, which for the most part they own outright. Clearing your mortgage is vital, the amount you spend is largely determined by the amount of debt you carry. You can almost imagine debt as being paid today for money you have not yet earned, live too high a lifestyle today and you end up paying for it in the future.

7. 80% are first generation affluent and a high percentage are also immigrants who got no head start.

8. Their spouse plays a vital role, the spending habits of a partner can have a truly massive effect on the household budget.

9. They invest heavily in education, both for themselves and their offspring.

11. Most of them are fastidious investors and they are also savers in the traditional sense.

So it would seem that hard work, planning, keeping debts low, living below your means, putting money aside and other such things are the lifestyle patterns, and habits of those who become very wealthy. There is nothing in this that astounded me, it did however, put in plain black and white the fact that time and planning are also required, hard work is simply not enough and in that respect it was an eye opener to find out that this translates into hard numbers, it’s not just ‘dumb luck’.

I would advise anybody who has wealth on their list of agendas to read this book as it lays out a good foundation on the mindset of people who are not only wealthy, but financially independent, simply replicating this approach would do wonders for most people.