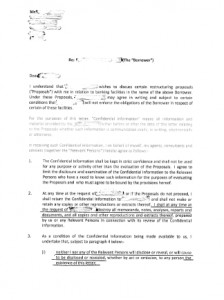 Due to disclosure requirements I can’t actually tell you much about dealing with banks when it gets to the specifics of some cases, what I can say is that should a person get any debt write down of the type that banks are not doing that you will be asked to sign something like the letter to the left (click for full version).

What we do find frustrating is that there will be an insolvency register where people are named, but that you can’t find out what kind of restructure took place or what creditors accepted.

This is almost like having an absence of case law with which to go to court. It’s a huge oversight and will reduce the effectiveness of advisors who will all act in a common arena totally blind to what all of the others are doing.

As for specifics, this means you can’t ever talk about getting a write down or even a non-write down advantageous re-arrangement. You can be asked to destroy all of the evidence you have referring to it prepared by you, your advisor or the bank (where you hold the documentation).

I would like to say that massive progress is being made in this space, but unfortunately I can’t disclose that. Another giant WTF for Ireland.