With the new report on repossessions out it is probably a good idea to look at some of the actual statistics. Many commentators mistakenly describe property that isn’t taken back through repossessions as a ‘repossession’ when it is more in line with liquidated damages.

A repossession by definition is a seizure of collateral securing a loan in default, in most jurisdictions this comes with a court order allowing the lien holder to reclaim the property. In a ‘voluntary surrender’ that isn’t seizure process, and in an abandonment it is also about limiting the value reduction of idle property, for that reason we break the figures down into court ordered possessions and those that are done by choice or by leaving them without notifying the lender. 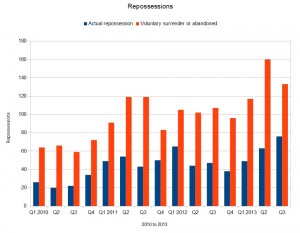 And what you can see is that the orange bar which is the abandonments and voluntary surrenders far outweigh the blue bars which are the ‘repossessions’ where somebody is being brought through the process in court.

The non-court repossessions outnumber court lead ones by a ratio of over 2:1.

Not only that, the repossession orders don’t always result in an actual repossession, it merely gives the lender an option to repossess.

That repossessions are well below the repossession orders is telling in that respect, because the one that actually gives the green light is an execution order and typically they are not given at the same time.

This is set to change under guidelines being proposed by the Expert Group on Repossessions, they think that issuing both at the same time has merit. When a property is abandoned (which often accompanies an emigration or other long term intention not to return to habitation) that shouldn’t be viewed with the same critique as putting a family out warrants, which is why it is perhaps best to separate these out so that we don’t amplify the issue beyond it’s true size.

Taking the total of mortgages in arrears for more than two years and comparing it to the repossessions over a nearly four year period (which skews the figures but is just for demonstration sake) you see that only 680 from the start of 2010 were taken back via the courts while there are 31,834 over 720 days overdue. That gives an actual repo rate on just the deepest arrears of 2.1% on only the portion of arrears which is beyond recovery – that is hardly an example of banks riding rough shod over people.

It doesn’t make the experience any nicer or easier for the borrower, but also doesn’t support the idea that any speeding up of the process will result in tens of thousands of people being removed from there homes any time soon, the process is slow and likely to stay that way.