News of the World: Money expert on Debt 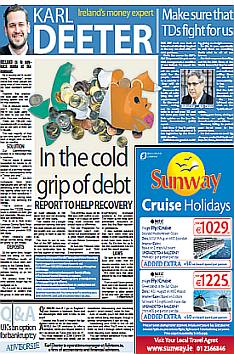 IRELAND is in payback mode at the moment. As a country we’re experiencing “deleveraging”, which means that many people are using most of their money to pay back excessive borrowing. However, that practice only puts cash into the banking system and not the real economy.

This is because banks aren’t lending — they’re too busy using the cash to put out fires within their own institutions. There are 786,000 Irish households with a mortgage, and six per cent of them are in trouble. The vast majority of that six per cent haven’t paid the bank a single cent in more than six months.

Our Government-led solution is to encourage that to continue. They’ve made it almost impossible for banks to repossess homes — Labour’s solution of a two-year moratorium on repossessions reeks of “delay and pray”. A further 24,000 mortgages have been restructured and are still not performing, while 35,000 are only staying afloat due to a change in their conditions — mainly by not paying back the loan, only servicing the
interest.

That’s before you consider the 110,000 households in arrears on their gas and electricity. Money problems
are everywhere. This is at a time when European Central Bank President Jean Claude Trichet is talking about possible ECB rate hikes. When Ireland’s debt deluge comes along, things are going to get messy.

At the same time, households are sitting on more than €93billion worth of deposits in liquid cash, according to the Central Bank. This means that we’re perhaps looking at an Ireland divided. We already know that every second house has no mortgage on it. So it would be a strange assumption to believe that the group in debt are sitting on huge deposits at the same time and not choosing to pay off their loans.

This overhaul could be as little as a draft outline or proposal — or it could be something more concrete that would make a difference. The new Programme For Government hasn’t mentioned full implementation of
a great report produced by the Law Reform Commission of Ireland. Its look into Personal Debt Management and Debt Enforcement provides wide-ranging workable solutions to the problem.

The report is the most comprehensive document on debt that this State has seen in generations. It also outlines solutions that have been tried and tested in other countries and which have been shown to work. So it’s time for us to tell the Government that we want the report enacted.

Be sure to let them know loud and clear that we require sensible laws in this country so they can’t plead
ignorance when it’s too late. We need laws that allow people to fail in a reasonable fashion. If we’ve sold future generations down the Swanee, then the least they deserve is a mechanism to allow people to fail and then get back up