A popular idea that has been discussed in the past (and if Niamh Hennessy’s article proves correct may become working reality) is that of banks taking equity in the family home in exchange for reducing the debt on the property. I’d like to go through this by looking at the differences in cost, the difference to the mortgage holder and to take a look at why it may not be a great idea.

The bank balance sheet currently looks like the picture to the right, the value of the asset (the loan) is based upon the amount of finance advanced, not the value of the underlying security.

People who’s property fell 40% but who have no mortgage cannot crystallize that loss in the way that a person who can’t repay a loan can potentially do. When you get a property crash the situation looks like this new scenario. As long as the borrower makes every repayment on time then the underlying property (which is the security – the loan is the asset) remains valued in full.

However, if the person is having trouble repaying then it changes the situation, in some cases (depending on the size of the arrears) the loan will be written down in value but generally there is forbearance and other measures which aim to prevent a repossession and sale. They have become even more leveraged! They gain a small amount of reprieve but the bank doesn’t take a fair share of the burden.

So we move onto the fourth picture… 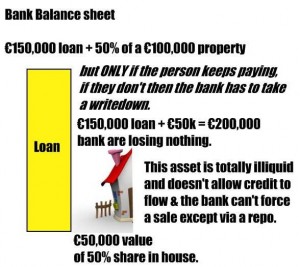 Not only that, but it doesn’t improve the banking position because by doing this they create an even more illiquid asset, you can’t securitize part ownerships, it doesn’t create a deposit which can be lent out, it has no effect other than to make an accounting trick in the banks favour.

Now we’ll consider that the person who can’t pay still can’t pay and the bank make a move on them.

Their situation in the first example was that they were €100,000 underwater – that would be the shortfall they have to make up if the house was sold from under them.

In this new situation does it improve? No, they still have the same 100k shortfall because of the bank owning 50% of the collateral.

Wild as it may seem we are likely through the worst of the bad news, I’m not saying its over, but that we are definitely deep into the 2nd half.

The latest OECD data suggest this.

As you can see from the table we are down almost 39%, which is not as far as many other estimates say we are (up to 50% according to Sherry Fitz). 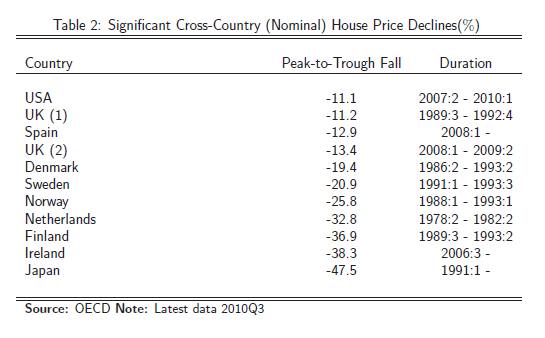 Even if Japan is to be our proxy then there is about 13-14% more to go. ‘We’ll be worse!’ I hear you say, but I doubt it, at the height of the Japanese bubble a 3m square closet in Ginza (you couldn’t build or even place a kiosk on this) sold for $600,000. It got stupid here, but not that stupid. Japanese real estate was valued at 4 times the entire USA at one point!

The other downside is if there is an eventual return of the market, the charts below show that on average it will take about 4-5yrs to get through the blow-out. Then something interesting happens, property stays below fundamental value for c.7yrs, a big driver of this being sentiment and the credit cycle post crash. Above we see the effects  in the UK, Finland and Sweden, the final graph is all of them together. If the person was able to hold out for long enough (bearing in mind the worst is over) then their odds are better by being a full owner of the property and getting some kind of sweetheart deal – but that is costly and will definitely represent a transfer from either taxpayers or other borrowers/users of the banks (via operational costs passed on).

So perhaps the best thing to do is rush through the Personal Insolvency Bill 2012 which is being drafted up as we speak, give people an out and some method that does it humanely. For those who have no chance of repaying the debt will need to be wiped out or it eradicates a motivation to return to work (why do it if a bank has claim on you once you make some money?).

We’ll need to see repossessions, lots of them, we need to get to market clearing prices and let people who can’t make it through fail in a manner that doesn’t destroy their future. Failure is not wrong, rather it is the excessive punishment of failure which puts people in a situation where they won’t try again which is the mistake.