Banking flim-flam, ‘We’ll huff and puff and may or may not blow your house down!’

The banks are constantly issuing threatening letters, we have posted many of them here. We have seen it all at this stage, couples in their 60’s with lots of equity being told to sell up when they clearly didn’t have to, others who are able to get massive write downs and every other combination of fact you can imagine.

Today we will look at the huffing and puffing portion of banks chasing a person for debts. The page to the left is a chronological example of letters a borrower will get from the bank. In this instance the person is defaulting because they don’t want to go on capital and interest and are engaging in what amounts to a game of ‘chicken’ with the banks. 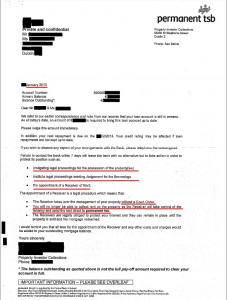 The first letter is standard, it came after the client missed about 4 months of payments, to this point there were two calls then this letter.

The letter starts off fairly heavy, in terms of implications, they talk about rent receivers, starting legal proceedings, that the receiver will take over etc.

This is designed to scare the borrower, who in this instance was not bothered by the lenders threats.

Banks have not moved in, they probably won’t, the borrower is confident of this and so they continue to withhold virtually all payments, from time to time they will pay half interest in order to get the banks to back up just a little.

The borrower who is easily spooked (and any financially literate borrower knows banks don’t want to actually take back properties) will respond to this, but the vast majority won’t.

They may try to get back on track but the underlying motive here is to be left on interest only or receive some other brand of forbearance in the short term.

The second letter takes a new tone, the level of arrears between the first letter and this one have doubled. We have to black out details in order to publish these letters but underneath the arrears are now twice what they were. 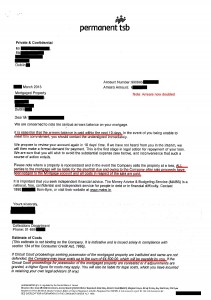 Now the bank are saying they want their money in 10 days. Put a time line on it, the first letter said seven days, now about 80 days later they are asking for payment within ten days. Add it all up and thirteen times over it has been shown that their threats lack credibility.

What does this tell a borrower in terms of incentive structure or the banks willingness to ‘move in’ and do everything they threatened you with? It simply reinforces the idea that they are unable to deal with their problems, the borrower isn’t getting a solution, but equally the bank isn’t either.

The borrower is better off, the bank isn’t. The banks, who lack the capacity to deal with this in turn issue more threats because that’s about all they do well (for now).

Look at the arrears profile of any bank and you see that it is an upward only line since the beginning of the time we started keeping records.

Which brings us to letter number three. 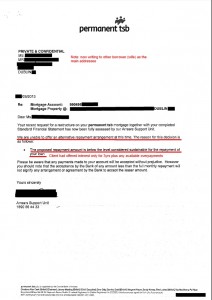 Letter number three is when the person is almost ten months behind, note they haven’t done any of the things they threatened to do.

Now they change tack a little, they write to the persons wife as the first addressee instead of the husband, this ‘swap over’ ensures that the guy isn’t hiding all of these problems from the other partner.

And they do this in the letter which is only sent to let them know that the bank have refused to accept their alternative repayment plan.

There are no repossession orders.

There has been no court case.

There is no receiver of rent.

There is no receiver full stop.

There is no bill run up as mentioned at the bottom of letter number two for €4,500.

There is no anything really, other than the odd phone call, and then a proposal which the bank always say no to (at first).

The client offered interest only, the bank refused, if the person was on a tracker you might be forgiven for saying ‘they should be able to pay more than interest’, but in this case the person is on the bank’s variable rate meaning they are paying close to 6% and are asking to keep that same high rate but just to make interest payments for a few years more.

Imagine asking for some time to get your financial house in order… The banks can imagine that because they are experts at that, but they don’t afford the same time to their own clients, there is an interesting hypocrisy in that.

Now we get to letter number four. 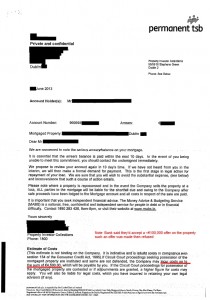 By this time the borrower is into strong five figure arrears, that’s the unpaid portion, and they have been making little or no payments for almost a year.

The bank are very concerned and say they want their money within ten days. We heard them say that before right? Yes, it was about three months or more ago, and yet, many multiples of ten days have passed since then.

Again, there will be a review of the account, there will be ‘legal action’ of some description. They remind the person that MABS is always there to help them, what they don’t mention are the several months waiting time it often takes to see a MABS advisor, perhaps they borrower should write back and say ‘we are just waiting on our appointment’?

Once more they are being told of this €4,500 cost that could be lumped on top, but at this point it hardly matters? The person is far enough along that they are starting to see the true gameplan, which is that the banks work on fear, and when you don’t respond to that fear they don’t do anything.

They were told that a sub €100,000 offer would be accepted, they got such an offer and the bank said no. Now the client believes this was all a ruse to make them believe that the bank were serious about going after them.

This is why Dublin is the only city in the world that has had one of the worlds most calamitous property crashes and yet we are hearing there is an absence of supply! The whole thing is predicated on keeping the asset holders as the asset holders throughout each cycle.

And the banks know that by moving in they get hammered, so it’s easier to issue threats that are increasingly ignored. The borrower is now anaesthetised to any scare tactics.

So we get to letter five, this is the most recent. 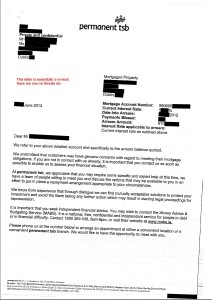 The borrower got their arrears back down to five figures again, this only involved paying over a few months of the full rent received. And now it’s a total reboot of the system.

No rent receivers, no legal action.

Again, nothing really, the borrower is still almost a year behind, they still haven’t reached agreement, but in the banks mind everything is o.k. again, except that it isn’t, they’ll be re-writing those letters again in the near future.

Because this borrower knows that they don’t respond to niceties, they only respond to the one language they speak, that’s the language of forced negotiation, by engaging the borrower believes they only lend credibility to the banks giant bluff.

Give it time they told me, they’ll come around to my way of thinking, and we can’t blame them for saying that, because if they would just offer some medium term interest only and move on none of this would be happening.

So for now they go back to playing chicken where the bank will huff, puff, and then (individual circumstances providing) perhaps, or perhaps not repossess their houses.

This would be funny if it weren’t so real.