Arrears solution for a strategic defaulter: here’s a new plan you can ignore 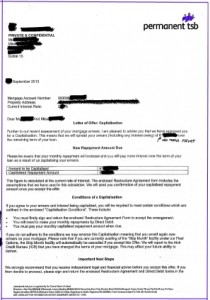 We make no secret of dealing with strategic defaulters, depending on the client we don’t necessarily say that they are in that category, but with most of them we try to be forthright enough to make it clear that what they are doing is intentional and doesn’t have to be this way. That aside, the banks are still trying to find ways to resolve the issues.

One such offer came to one client from PTsb. The interesting thing here is that the client did fill in an SFS and was refused split mortgages and other such options because they didn’t qualify but continued to pay zero.

Then they get an offer to capitalise the arrears. That’s wonderful, they are now no longer in arrears once they sign up to this! What a great outcome, now they can go back to repaying zero and start the whole clock all over again.

So, having racked up about 18 months of un-paids on interest only the arrears will now be (upon signing) back to zero, problem of ‘arrears portion’ solved, problem of liquidity and willingness to repay remain the same.

This outcome was very edifying to the person involved, they couldn’t believe their luck, who would have thought that in return for a giant ‘two fingers’ to the bank that they would not only strike a deal, but one that clears your arrears? Wow…

Eventually PTsb will move in, and their earnest attempt at a middle ground is to be commended, they sought some resolution where there was none, but looking past all of that the end game is clear, there is no offer outside of one that gives this person equity and a reason to stay in the game that is going to work.