If you were to read the headlines and not delve into the figures you’d be forgiven for thinking banks are either taking back houses wholesale or are about to. There will be a marked increase that is for certain, but have a look at some of the actual figures below. 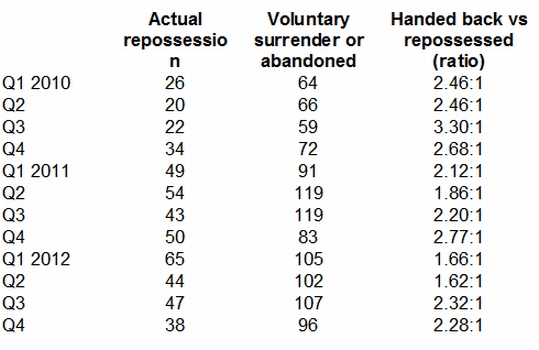 This shows actual repossessions versus surrenders and abandonments. It’s clear to see that jingle mail and people giving back properties voluntarily is far greater than those being ‘turfed out’. The ratio is generally more than 2:1 against repossessions.

Some of these properties are being sold at a loss, some have equity, others are owned by people who just leave the country, the main thing to consider though, is that for the 95,000 loans more than 3 months behind (the topline figure of almost 150,000 ‘in stress’ is a little misleading) only 200 were taken back without consent in 2012.

That’s a mere 0.2% of the loans in arrears, and it’s still a nearly insignificant 0.85% of loans that have not been paid in 2years or more.

So of course there is going to be a big number coming on stream, but only because we stopped an adjustment from happening for so long, the critical point to consider now is making this adjustment as painless as possible for the affected parties in a fair manner.