Ten of the most beautiful places to visit in Bulgaria

I think it’s quite amazing that Bulgaria is still considered to be off the beaten track for Western tourists, because the country has a bit of everything, and all at very affordable prices. The Mountain slopes of Bansko and Pomporovo attract skiers in the winter and the Black Sea beaches draw the crowds in the summer months. Sofia – the capital – is probably not the most beautiful city you can visit, but once you get out into the countryside and start exploring the gorgeous coastline, I think you’ll fall captive to Bulgaria’s special charm. Here is my choice for the most beautiful places to visit in Bulgaria…The Black Sea Beaches – Bulgaria’s most famous coastline.

1. Nessebar – known as the Pearl of the Black Sea Often referred to as the Pearl of the Black Sea, the historic town of Nessebar dates back to antiquity when it was founded as a Thracian settlement known as Menebria. Greeks, Romans, Byzantines, Bulgarians, Crusaders, and Ottomans all took turns fortifying the ancient town, and the narrow peninsula on which it is located. Today a stroll on its cobblestone streets will bring you to remnants of some 40 brick churches, dating back as far as the 5th century. The beautiful town is such an important site it’s recognized by UNESCO as a World Heritage Site. One of the oldest towns on Bulgaria’s Black Sea coastline, Sozopol is a popular fishermen’s village and seaside resort. Located 35 kilometres south of Burgas, Sozopol was known in the 6th century BC as Apollonia, complete with a temple dedicated to Apollo. The town is small enough for a casual stroll. You can walk along the quays as the day’s catch is unloaded or through the old town with its wooden houses calling out in desperation for repair. If you find the sea too deep or rough for swimming, you can always sunbathe on the rocks located along the shore.

3. Rila Monastery –  the most famous monastery in Bulgaria Known as the Jerusalem of Bulgaria, this picturesque Eastern Orthodox monastery in the forested mountains less than two hours south of Sofia is definitely worth a pilgrimage visit. Named for St. Ivan of Rilski, a tenth-century hermit who lived in a nearby cave, the monastery has been built, burnt, and rebuilt over the centuries, with the latest construction dating to the 1800s. Enter the courtyard and you will be stunned by the perfect harmony of the church, with its graceful arches in bold stripes of black and white set under a row of sculpted gargoyles, tiled roofs, and five domes reaching towards the sky. In the distance are the peaks of the Rila Mountains, complimenting an oasis of serenity perfect for religious hermits and modern visitors alike. Belogradchik Fortress is a manmade construction set against a stunning outcrop of rocks. The combination is so unique and picturesque, that it seems to have been lifted straight out of a Disney fairytale. What’s even more unique than the fortress is the surrounding countryside. The Belogradchik Rocks, named in 2009 as Bulgaria’s candidate to be selected as one of the New Seven Wonders of Nature, are a stunning arrangement of strange-shaped sandstone and conglomerate rock formations. Walking the narrow alleyways of the village of Koprivshtitsa, some two hours east of Sofia, you’ll feel that you’re being transported back to the momentous months of 1876, when the Bulgarians valiantly fought against their oppressive Ottoman rulers. Inside the colourful houses, representatives of Bulgarian National Revival architecture of the 19th century, local patriots plotted their rebellion leading up to the first shot being fired in the ultimately unsuccessful April Uprising. The village is full of memorials and museum houses displaying ethnographical treasures, old weapons and farm implements, national costumes, artwork, and jewellery.

6. Veliko Tarnovo – one of the oldest cities in Bulgaria This was the historic capital of the Second Bulgarian Empire between the 12th and 14th centuries, Veliko Tarnovo is located in central Bulgaria and is a popular tourist attraction. The reconstructed Tsarevets fortress bears no resemblance to the medieval palaces of the Bulgarian tsars who ruled from the hilltop until their defeat by the Ottomans in 1393. Still, one senses Bulgaria’s former greatness when walking through the gates of this picturesque stronghold. Melnik is known for two reasons. It is the smallest city in Bulgaria and it is home to some of the best wineries in the country. It will take you minutes to walk up the town’s one main street, but you’ll sit for hours at a local tavern, your head spinning under the intoxicating spell of the rich red wines. If you manage to get up from your seat, the nearby pyramidal Melnik Rocks and the Rozhen Monastery are worth a visit. 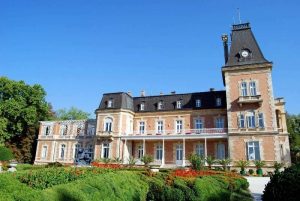 The Evksinograd Residence is one of the most romantic buildings in Bulgaria. Located 8 kilometres north of Varna, this 19th-century palace was often used as a holiday home for royalty. The building was built after Prince Battenberg visited Varna in 1880 and was so impressed by the local nature that he had to have a property in the area. Construction began two years later adjacent to an old monastery and the building was finished by his success, Bring Ferdinand.

The exterior of the mansion is very similar to French mansions of the 18th century. It is ornate, romantic, and quite beautiful. The interiors are luxurious, with marble fireplaces, French chandeliers, large dining halls, antique furniture, and rare paintings. Expect to see a lot of gold and silk! The grounds surrounding the park are no less decadent. French park architects were designed to layout the 800-acre park. They planted many rare species of plants, some of which are alive today. At one stage, there were more than 500 species of flowers in the grounds and greenhouses. A winery was added to the palace in 1891 and still produces excellent wines today. It produces Chardonnay, Riesling, Traminer, Muscat Ottone and Vratsa Muscat wines.

One of Bulgaria’s main tourist attractions is a group of glacial lakes located high in the Rila Mountains. The appropriate time to visit the lakes is in the summer months, as even in June the lakes can be frozen, with the terrain alternating between deep snow drifts and patches of brilliant wildflowers. The lakes are located one above the other in a mountain valley, interconnected by streams and waterfalls. Access to the lakes is not easy, although riding a ski lift shortens the distance up the steep mountainside. Legends say the lakes were formed by the tears of a female giant, crying for her beloved. Most travellers don’t realise how picturesque the natural environment is in Bulgaria until they see the Pirin National Park. It is a 403.56 km2 park that in southwestern Bulgaria. It encompasses most of the Pirin Mountains — a vast mountain range covering through the southwestern part of the country. Pirin National Park has been declared a UNESCO world heritage site in 1983 and the park is a part of the World Network of Biosphere Reserves. The park is home to more than 100 glacial lacks, with the largest being Popovo Lake. There are also many stunning glaciers located throughout the mountains.