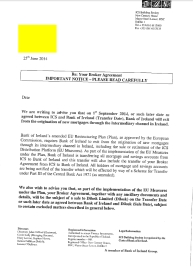 After 150 years the Irish Civil Service building society (known as ICS and a subsidiary of Bank of Ireland) is set to close. The letter delivered to the intermediary channel is on the left.

ICS started before the formation of the State and was subsumed into Bank of Ireland in the mid 1980’s.

The relationship with mortgage brokers was long standing, although in recent years there were a few developments which caused it to lose market share.

ICS first took brokers away from Bank of Ireland in c. 2009, previous to this brokers could deal with either a local branch (we dealt with now closed Westmoreland St. branch) or via ICS.

Then they reduced procurement fees, lastly they engaged in ‘dual pricing’ where it was cheaper to go to BOI than to ICS. All of these things were perhaps justified in the view of ICS but it didn’t mean people would then borrow from them and these things combined lead to less broker support which was their main channel.

There was an ICS direct model for a short time called ‘The mortgage store’ but they closed, and when other banks increased procurement fees ICS kept theirs low which compounded the problem.

In truth they were happy to start the winding down process as they had to be sold (see letter indicating the EU direction on this), the buyer is confirmed ask Dilosk who intend to distribute on a ‘broker only’ basis. We are obviously happy to hear that and think it makes sense as the branch lead expansion isn’t necessary in a modern market any more.

So while we lose yet another bank, we are likely to gain one in a lender more fit for the modern marketplace, all the same, rest in peace the old ICS 1864-2014