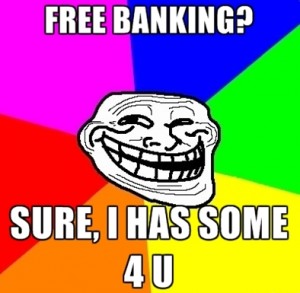 The natural inclination is to be angry with AIB.. What are they at? Jacking up fees? Ridiculous!

Holding an average balance of €2,500 in your current account means that anybody on the average industrial wage will probably never qualify (because they’ll only earn about €2,330 per month after tax) unless they start to use it as a ‘savings account’ as well.

Some thinking thus far is that you always have the option of putting €2,500 in an actual deposit account at 4%, that will yield €100 per year which, after our fancy new [higher] DIRT rate kicks in, will net you €70 or about €5.83 a month which will buy you a Mars bar once a week every week.

‘Free banking’ was never actually ‘free’, there were always charges for overdrafts, and referral fees, and bounced cheques. What was ‘free’ was the access and use of the payments system or the ‘money transmission system’ as we call it in bankolloxolgy.

the rage of the National Consumer Agency is an obvious vested interest position, something I don’t mind pointing out because I’m already going to hell anyway. Anne Fitzgerald has called for people to ‘leave’ AIB due to this, which is fine, but they never sought to understand the reasoning, which to me is a shame because the real question is ‘why’. People may leave anyway, but why are AIB doing this?

Before going further, I should point out that people probably won’t leave, Bank of Ireland did market research about 7 years ago that showed you are more likely to leave your spouse than your bank, so for all of you saying ‘I’m leaving AIB!‘, take a good long look at your partner, and then just leave them instead… You know you want to (o.k. I’m trolling on that one).

AIB say that 2 in 5 people will still get free banking as they are students, over 60’s or graduates. Personally I don’t think that being over 60 should get you free banking, in fact, if you are going to charge then everybody who uses the bank should pay to make it unbiased.

Better yet would be to have a ‘free account’ that gives minimal services – because access to banking is still an issue, one that the EU has attempted to address with calls for a ‘basic’ bank account for every person should they want it. As many as 100,000 adults are thought to have no bank account.

Banks are paying too much for deposits, part of this is compression caused by falling rates. Something I was banging on about even 4 years ago. Another issue is that of the actual ‘business’ of deposits, people think of banks as ‘loans on one side, deposits on the other’.

But in traditional banking there was a deposit business with a commercial spread (typically achieved by offering rates lower than interbank) which was achieved because banks held more deposits than loans, the reversal of this created a desperation for funding which feeds into modern banking problems, I’ll blog on that and cure your insomnia some other day.

So on to the main bit… €4.50 per quarter and 20-30c per transaction and a guide cost of €90  year. That would imply (taking figure of 25c per transaction) about 328 transactions a year. So why charge? In short, it is because the payments system is about 40% of banking operation cost. And banks, rather than cutting cost have found ways to increase it.

Sadly it is true, they aren’t just incompetent at lending.

Phone and internet banking were meant to replace branches. They didn’t. They became alternative channels and branches are still open, as are call centres, as are internet teams and extra IT security etc so rather than reduce overall cost they have embedded ongoing costs in the payments system, now they can’t get rid of any of the channels because each has it’s dedicated user base and many work across several channels.

Only NIB has made any headway in this respect, and they were able to do that because they lack scale, not an ideal strength in many respects.

I hope you didn’t bother answering my teaming millions, you already know I’ll dick it up by giving a confusing response.

You quickly see that €1,000 isn’t €1,000 from a branch perspective, rather it is (or has the potential to be) a series of costs that have to be absorbed or charged for. There are a few parties that can stump up

1. The account holder via fees
2. The bank by accepting reduced income, hitting shareholders or cutting costs
3. The depositors via lower deposit rates
4. Or borrowers via higher credit costs.

The last one is unacceptable, the third is unfeasible, the second untenable and the first unpopular, its all ‘un’s’ all the time.

The cost of providing an account? It is estimated at the cost of the payments system, which if €90 is the equivalent guide would mean that €2,500 earns a bank about the same amount in their deposit business, it implies an interest rate earned on free money (current accounts are also called ‘zero rated funds’ and have a very important role in banking) of about 3.6%.

When a bank gets zero rated funds they can place them with a different bank, or in other reserve accounts and make money on it, that is part of the ‘no lending required business of deposits’.

Historically not every bank was doing lots of loans, some were primarily deposit takers. In fact, Irish banks didn’t even do mortgages until the late 70’s, they got into car loans and credit cards in the 80’s (prior to that HP co’s and Barclays were the ones doing it).

The Central Bank or Regulator will do nothing, they don’t control pricing, and the Government likely saw the costs before this decision was made and have tacitly endorsed it as well. No free lunches, no free banking, shazaammm!!!! It has followed Tracker mortgages and the Dodo into a secret house in Area 51 where Elvis and JFK are playing their fourth game of chess today.